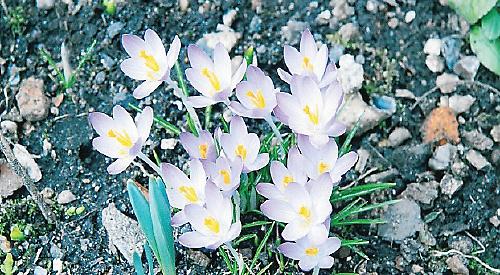 Sir, — Concerning great-crested grebes being very late this year in nesting or producing young (Standard, June 9), I include a photograph which shows that this is not necessarily the case.

The “deep freeze” conditions in the early part of the year did delay the first real colours of winter which, to me, will always be the tiny hatch of well-sheltered crocuses — the first real colours to add pleasure to this very gloomy time of year. Yes, there were snowdrops earlier but, being white, I think they look cold anyway.

What has this got to do with great-crested grebes, you may ask?

Moving here in 1947, I have observed the stretch of riverbank between the Phyllis Court Club boundary and Greenlands lake at least four or five times a week from walking dogs, fishing, swimming and, later, via our old boat.

Even in the freezing conditions of an early Sunday morning in mid-winter we went skimming for pike and perch, which are good to eat once the sharp bones are managed and an appropriate method for cooking them is devised.

Soak in well-salted water for a few days to get rid of that river mud smell (and taste), then remove the head, fins and tail fins and gut the fish before simmering in lightly salted water until the flesh just falls off the bone — absolutely delicious!

Cats will appear from nowhere to polish off the discarded remains, so no need to put them on the compost heap or in the dustbin!

But once again I have digressed from the subject of great-crested grebes. The answer lies in the area they are situated in. Those just below Marsh or Hambleden locks will have the fast flow of water from the weirs to contend with so will delay nesting until flood times are over and the flow of water returns to summer levels.

In the areas well away from weirs and flood level flows — roughly halfway between such places and where the river is at its wildest and smooth-flowing — is where the ones I have photographed first rear their young.

Then, as soon as possible, they are moved to a backwater or sidestream where there is little or no current flow or even an artificially erected backflow to “flush” the streams which are valuable for the summer crops and grazing.

That then is how I have observed all this for more than 50 years now. I am not an obsessive nature watcher, just a general observer, that’s all. — Yours faithfully,