Found among the effects of G L Jones, of Whitchurch... 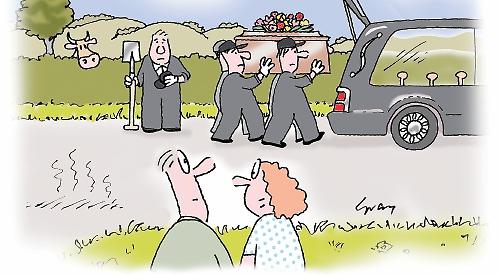 THE wind has turned to the south again today and the house is surrounded by the stench of Harry.

Since he was moved so very mysteriously overnight from his first resting place in High Street to the shrubberies opposite, Harry’s decay has been exponential, not least once the maggots began to show, squirming in his fur.

(I have named Harry after Hitchcock’s noted stiff-who-would-not-lie-still*, although the latter was human while my Harry — I do rather think of him as mine — is, or was, a badger.)

As I first pulled open my kitchen door today, the smell entered like a ghost, wafting its way around me and around the refrigerator close by.

I admit I am feeling just a little unwell now — not seriously, exactly, I wouldn’t want to use that word, not yet.

But it is possible some of Harry’s many flies have got in during the past few days and landed on some food, perhaps. All my own fault, of course, I’m so inattentive!

His presence was reported on a Saturday, the morning after he first appeared, in the form of a recorded message to South Oxfordshire District Council cleansing made by a similarly affected neighbour.

I myself phoned on the Monday and, in the fullness of time, was allowed to give the same details to a living person.

Now, five days on, Harry is still with us in the body. Lying on his back there, stiff-armed as if trying to claw his way into the sky, the maggot-seethe on him is so copious that he resembles some huge, peculiarly shaped breakfast bowl, full to the brim with demonically-possessed Rice Krispies. There is, of course, a brute old-style logic suggesting that any council cleansing service might want to remove a dead animal soon after first discovery, so that the people concerned could engage in a simple dragging/ lifting process not entailing maggots or putrefaction.

I had experience of such a frankly bland operation myself some 16 or 17 years ago, and in comparable circumstances, when I made one of those dull old phone calls (remember?) that was immediately answered by a switchboard operator who put me through in under 30 seconds to an operative of the sentient and enthusiastic kind.

“Dead badger?” I remember her responding. “Sure, give me the details and we’ll be there tomorrow.” I mean, yawn!

The blokes who came were just as good as her word and the animal vanished almost as if he had never been there, days before anyone had a chance to name him.

How much more stimulating — I write here as the truest of believers in humanity’s cyber-future — to be able to listen, as we do now, to all the various prose styles of the state-of-the-art robotized answering service of the new-minted South Oxfordshire and Vale of White Horse joint councils — and to be given so long to do so!

That placid opening announcement, the impeccably voiced request for spoken details of the department needed, which, of course, we accept in advance that the robot will not yet quite understand, despite rain in Spain attempts to convey “clean-sing... cull-en-sing, kuhh-lenz-zingg” and so on.

The tantalisingly suspenseful pause (has one been cut off?) while the robot tries its digitized best to link you with a human switchboard operator who does, once found, put you through in 30 seconds to... the queue! What else but the queue?

Here, as we queue, we are given opportunities to listen to sweetly voiced council messages about the council’s ongoing heroic works on behalf of residents, about the current slight disorder in the bins collection service, along with the most astonishingly detailed advice on what we may do ourselves to compensate for it.

The anthropoid antique? Forget it. I only wish I could live to see where all this is leading yet even as I write this my arms are becoming limp, my living strength is, I can’t deny it, down, down, down. This surging dizziness. But I must fight back and record what is happening.

Through my kitchen window I can now see a small man climbing out of a small grey pick-up. This has no ramp up which two men might hope to drag a dead badger but even so could he have some badger-centred purpose?

He is dressed in a skimpy plastic jacket whose arms seem to end at the elbows. He has no gloves, no mask, but he does carry with him what looks like a single standard size black bin liner.

If only I had the strength to crawl across and speak to him. Could this bin liner — let’s not ask how — be his one-man badger-removing tool?

He takes a few steps towards Harry, holding up his little bag as if it were a talisman. Now he is pausing, frowning, considering the problem, perhaps, and, yes, it can’t be otherwise, walking back towards the driving seat of his vehicle (its engine is still running), getting in and...

He left, you see? There are no two ways about it. He and his vulnerable, bare, pale forearms and his black bag.

And Harry, old friend, remains there clawing upward, just as he did before.

It is obvious, of course, why councils should all now be following the diktats of their most thrusting modernisers, getting rid of vulgarly human employees such as switchboard operators and two-man cleansing teams.

Jobs as a whole are, ultimately, passé and in the interim money saved is money saved and can be immediately set aside against the day when this or that disruptive malcontent reports a council to… what, the Health and Safety Executive, precipitating fines or some litigious gang who decides to sue it?

Or any members (when more than one) of its bold and bonny badger-bagging staff thoughtlessly come down with some illness? After all, isn’t it an imperative that every society should constantly creating new systems for only the very best of reasons, namely that they are new?

I believe I may have lost consciousness more than once by now but I understand that while I, as one unit of humanity, am already doomed, I must accept this. Others will follow, to witness the long slow ascent to our digital apogee. All I can hope for now is that someone may find this and pass it on, perhaps, to the Hen…

(G L Jones was once the author of The Wind In The Pylons, an environmental satire).

P.S. Harry was finally removed 10 or 11 days after his demise — how, exactly, is not known.