What kind of person smashes into a car and doesn't own up? 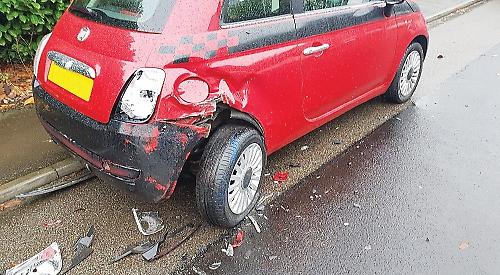 On Saturday we got up early and went to Aylesbury to look at a Fiat 500 which she wanted.

We bought the car, insured and taxed it and drove it home with the intention of surprising her with it when we picked her up from her boyfriend’s home on Sunday.

Our daughter had saved her money for this car and it is costing us almost the same price of the car to insure.

Instead it was us who got a surprise on Sunday when we woke up to a phone call from a friend telling us the car had been hit by another car during the night.

We have spoken to a couple of neighbours who heard the collision at around 1.30am and looked outside.

The other car, which was driven by a tall, slim young man wearing a light-coloured baseball cap, ended up horizontally across the road.

The driver got out to see the damage. He then got back in and spent a good five minutes or so trying to turn the car back towards Harpsden and then drove off without leaving a name or a number or his insurance details.

It seems from the car parts left behind at the scene that he was driving a small, metallic blue Peugeot. He hit our daughter’s car with so much force that it was knocked into the car in front and had both nearside wheels knocked on to the kerb.

Whoever did this has no conscience and only thought about covering their own backside and not about the devastation their actions have caused. Whoever did this left a mother and father in tears when they should have been excitedly getting ready to drive over and surprise their daughter.

Instead we had to call our daughter and tell her that while we had actually spent her hard-saved money on a new car and found affordable insurance on it, someone had smashed into it and driven off without leaving any information.

This left our daughter distraught and sobbing her heart out on the phone. Please publish this as we cannot afford to replace this car or pay to have it fixed and anyway the driver who did this should be paying for it, not us.

This could cause our daughter’s insurance to rocket through no fault of her own — and she didn’t even know she had the car, let alone get a chance to drive it!

The police have been informed so if anyone knows anything or has any information please contact the police and quote URN 439 01 1017.

There was also a van and a taxi there trying to get past so if these people have a description and the vehicle registration number we need them to contact the police urgently.

Something really needs to be done about this road, where cars are parked either side but after dark people seem to think it’s okay to drive along it at 50mph or even faster without being able to see what’s coming out of adjoining roads or round the next corner.

We are always hearing the screech of brakes and wait for the bang.

Any help you or your readers can give us with finding the culprit would be very much appreciated. — Yours faithfully,