Just when will bin contractor learn? 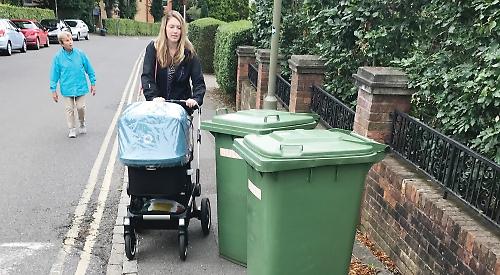 Sir, — Five years ago (almost to the day), I first raised the issue of dustbins blocking pavements with South Oxfordshire District Council.

I have raised it many times since and on August 18 was finally contacted by Ian Gillott, operations manager at Biffa, the council’s contractor.

He wrote: “I am writing to you in my capacity as operations manager for Biffa here in Culham.

“Firstly, I would like to apologise for the poor service that you have been experiencing, in particular the occasion where you walked into Henley with your elder daughter and granddaughter, encountering eight bins blocking the pavement.

I understand the frustration you must be feeling, having raised your concerns on a number of occasions without ever seeing them resolved for more than a short period of time.

As you are aware, the point where household refuse and recycling is normally collected from shall be the front gate or other point at the curtilage of the premises which gives the most convenient access for waste collection.

The approved return position for containers is from where they were collected. The crews are required to ensure that the return position is safe and not obstructing the footpath or highway.

On occasions where there is a narrow footpath and we are required to return the bins to the point they were collected from, invariably this may be a foot or so out from the initial position.

In a situation where there is only a small amount of pavement available, this can look as though the crew have made no attempt to follow the instructions that they have been given.

After looking through the pictures you kindly provided, this looks to be the case in the first. The remainder of the photos, however, are unacceptable, both from a personal view and contractually.

As a company, we have a legal responsibility to ensure our own staff and members of the public are safe while we carry out our operation and by forcing people to walk on to the road in order to pass badly returned bins we are not doing that and we need to ensure that we put it right as an absolute priority.

As a depot, we make 459,200 collections each week, the vast majority of which are problem-free. However, when we do receive complaints concerning safety or staff conduct, we ensure that they are acted upon immediately and as professionally as possible.

The fact that your concerns have been rectified previously, albeit temporarily, would suggest that the crew concerned have been made aware of how the bins should be returned but after a period of time have reverted back to their old ways.

As such, I will be looking to take disciplinary action against them. I will also be tasking my supervisors who are responsible for refuse/recycling and garden waste collections in Henley to carry out additional crew monitoring and supervision with an emphasis on bin returns over the next four weeks.

Again, I would like to apologise for the continued failure of service you have experienced since 2012.

I will be personally overseeing the collections carried out by the crew in question for the next month.

In the timebeing, if you have any further concerns or would like to discuss the matter further, please do not hesitate to contact me.”

I have now written to him again because the situation has not improved. It seems that Biffa is unable to ensure that bins are left in a safe and appropriate position.

In the meantime, pedestrians are forced to step into the road in order to get past them.

While this may not be a great hardship for some people, it’s still dangerous, especially for blind and disabled people (there are guide dog users here in Henley) and for parents collecting their children from school — imagine a parent with a buggy and another youngster on foot with a blocked pavement and the road busy with other school or college traffic.

It’s high time that someone was brought to account for the failure, over more than five years, to address this problem.

I have provided photographic evidence to illustrate the problem, including our daughter, a young mother, having to step into the road with her baby in a pram, to the council and Biffa. — Yours faithfully,