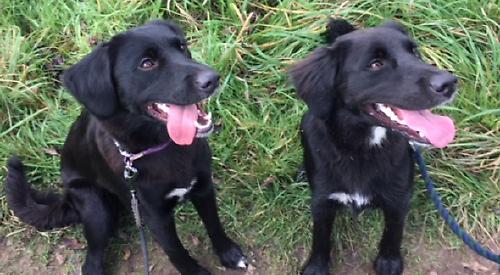 Sir, — I entered my dog Bronte in this year’s Henley’s Top Dog competition.

Although she didn’t win, I received many messages afterwards from people who had seen her photograph in the paper.

One of these surprised me greatly. It was from the charity Wild at Heart that I adopted Bronte through.

They asked me if I would be interested in sharing my contact details with a lady called Suzy who had adopted Bronte’s sister.

Her mother lives in Peppard and had seen Bronte in the paper. She told her daughter, who then tried to find me.

To cut an emotional story short, we finally met up recently.

Flossie lives in Bath now with her adopted family but Suzy brought her up here and we met in Peppard.

It was amazing. The dogs just played and played, taking it in turns to chase each other, tails wagging so much that they most definitely recognised one another.

They even enjoyed chewing the same stick while we had a chat over a coffee at the Unicorn pub. We have a video of the dogs and a lot of photographs.

It was an amazing and emotional day after the two dogs had been apart for nearly a year since they left Cyprus.

It is thanks to the charities Saving Pound Dogs Cyprus and Wild at Heart that these two amazing dogs have brought so much joy to two families here in the UK. And the work the charities do has brought happiness to many other dogs and families.

It is thanks to the Henley Standard that these two sisters became reunited again...

Thank you again so much for letting Bronte into your competition.

She has changed our lives and is loved to pieces — and she has a sister that she will now stay in touch with for the rest of her life. A magical day. — Yours faithfully,