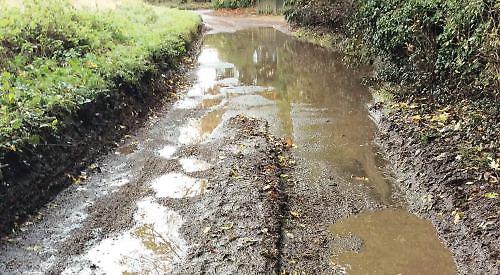 Sir, — After reading your report about Henley town councillor Stefan Gawrysiak mapping potholes (Standard, November 3), I felt impelled to send you a photograph showing the state of Mill Lane in Kidmore End.

Last year I sent you a letter and photo showing the extent of the potholes in Mill Lane and a Henley Standard reporter came to meet us.

As a result, Oxfordshire County Council said that it had no plans for Mill Lane.

Now the situation is even worse with more deep potholes. The edges of the lane are disintegrating due to the large and heavy vehicles using it and the rainwater cannot escape due to blocked gullies.

Henley’s roads obviously have more traffic but Mill Lane is used as a sat-nav “rat run”. Vans and heavy lorries are constant users.

The situation is quite disgraceful and disheartening. Mill Lane was a farm track and then became a lane, with no foundations, only laid with tarmac.

How much would it cost the council to at least clear the gullies and the mud and fill the deep potholes?

Mill Lane is the forgotten lane at the edge of the Oxfordshire/Berkshire border and the residents are left to cope with the consequences of trying to avoid the potholes. We spent more than £300 on new suspension on a car that has only done 26,000 miles.

So, Oxfordshire County Council, before you think of spending money on Henley roads (of which the one in your photograph looked perfect!), spare a thought for the residents of Mill Lane. — Yours faithfully,

Sir, — In August you very kindly published my letter bemoaning the dangerous road conditions on the exit from Waitrose car park on to Bell Street in Henley.

My wife and at least one other lady required treatment in the minor injuries unit at Townlands Memorial Hospital after tripping on the sunken manhole there.

I informed the town council and the police and I also wrote to the highways department at Oxfordshire District Council, describing the accident and including a photograph of the sunken manhole which had caused falls.

I received the following reply: “Thank you for contacting the Oxfordshire County Council highway enquiries team.

“This response is an acknowledgement that we have received your correspondence and we will aim to respond within 10 working days. It may take us longer to respond during busy periods. Our opening hours are 8.30am to 5pm Monday to Thursday and 8.30am to 4pm on Fridays. We are closed Saturday, Sunday and Bank Holiday. If your enquiry requires immediate attention, please call 0345 310 1111. You can also report road or street faults via our website, ww.oxfordshire.gov.uk

“If you would like to provide any feedback on your experience with us on this occasion, please complete our short customer satisfaction survey.”

Three months later absolutely nothing has been done to repair this roadway, which is of necessity in constant use by pedestrians.

Consequently a dear, elderly friend, who would prefer to remain anonymous, fell at the same place, damaging her hands and knees and shaking herself considerably.

Would you please publish this letter in order to warn the public and encourage the council to deal with this and hopefully avoid further accidents? Had my wife or my friend been a young mother carrying a baby, and fallen as they did, the baby could have been fatally injured.

I will again contact the county council, Henley police and also Waitrose in an attempt to have this dangerous road condition repaired without delay.

Meanwhile, please do all be careful when using this busy, unofficial pedestrian crossing. — Yours faithfully,

An Oxfordshire County Council spokesman responds: “We are aware of flooding problems on Mill Lane and the intention is to install a soakaway and also carry out repair work to the road surface. At the moment there is a development taking place nearby and the soakaway and patching will have to take place once that is complete. In the meantime we will continue to repair potholes. We are currently investigating the issue raised about the Waitrose entrance.

“Potholes and blocked drainage gullies are things that people can report to us direct online via Fix My Street. Doing this means problems are sent direct to us and inspections can be carried out. Blocked drains are cleared where there is a risk of flooding and potholes that meet our criteria would be filled. Where there is no risk of flooding drains are added to our planned programme of drain work.”