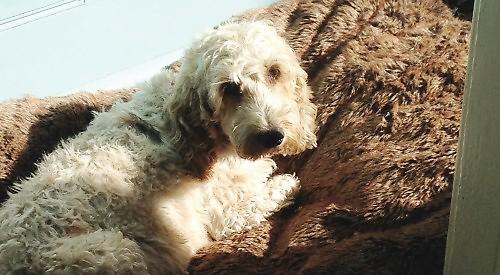 Most people who walked past our house in Church Street, Henley, would have spoken with Hebe and continued to do so even when she became deaf.

Our doorstep was Hebe’s favourite place and she was out whatever the weather, come rain or shine.

She had a very interesting life coming to work and being in the art department on films such as Far from the Madding Crowd, The King’s Speech and The Muppets as well as, latterly, on Call the Midwife.

She travelled extensively to France and on locations throughout the UK but she was happiest in our front garden where I would often hear people outside the door talking to Hebe.

I believe she gave a lot of pleasure to those who stopped.

Many children and people would come up to me in Henley and say “Is that the dog from Church Street?”

I would be surprised at how many people knew her and wanted to know her name for the next time they passed our house.

May she rest in peace. — Yours faithfully,