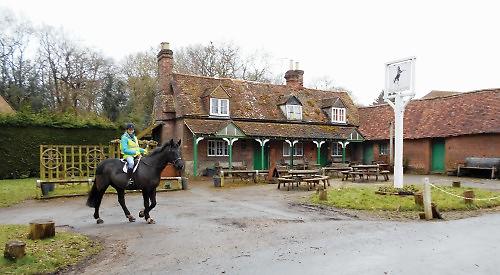 Sir, — Having just survived the gentle ministrations of having a tooth filled, I decided to return home by a scenic route using only a compass and road signs.

This resulted in navigating very narrow lanes and having to negotiate, in both senses of the word, when meeting an oncoming tractor!

After this I arrived at an open area with a building which was obviously an interesting hostelry. It was worthwhile to stop and take a photograph and, as I did so, a horse and rider appeared.

It is interesting to note that there are, in fact, three versions of a black horse captured in the image. — Yours faithfully,