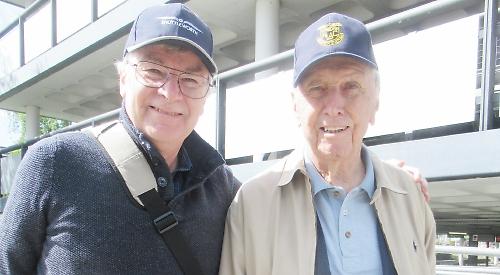 Sir, — Last month my wife and I had the very great pleasure of hosting Royal Canadian Air Force W/Cdr (retired) John McClure DFC and his son Doug, from Ontario, for five days.

W/Cdr McClure was a Canadian volunteer pilot in the RAF during the Second World War and we are most thankful that he applied — and also survived!

While he was here, he celebrated his 97th birthday with wartime RAF comrade George Wood, now a Church of England minister, at a care home near East Grinstead.

These are the very last two surviving pilots of the stunning British Westland Whirlwind cannon fighter which, in late 1940 and for most of 1941, was the fastest and most heavily armed aircraft in the war yet almost no one knows that because it was also “most top secret”!

During the McClures’ very brief UK trip, I organised a visit to the wonderful Shuttleworth Collection’s RAF centenary flying day and also received an invitation from Buckingham Palace.

Moreover, on April 18, I sent the BBC’s factual commissioning team an email asking if this unique wartime story would be worth a face-to-face discussion (following a negative response to a commissioning request in February).

Unfortunately, “my BBC” did not have the courtesy to reply so we still have almost no idea of the reason for being turned down. This will have been made known to my original contact Charlotte Moore, who is the corporation’s director of content and one of the most important 500 people in Britain according to Debrett’s, so is presumably unaffected when “my BBC” behaves in such a manner.

Anyway, I am now reliably informed by a good neighbour of mine that “our BBC” is encountering very strong competition from Netflix so my team will now make themselves known to that organisation to see if they might be interested to talk to the only outfit with 25 hours of Whirlwind veteran interview rushes recorded professionally eight-plus years ago at locations around the world.

That unique material can bring authenticity to almost any flavour of the foregoing rich and fascinating storyline that might be preferred, then agreed upon, for a production with truly worldwide audience pulling power. Incidentally, the descriptions “fascinating” and “rich” are the BBC’s, not mine.

Lastly, the fact that I have just made arrangements to cease paying my licence fee should normally be a cause for celebration.

However, I just feel sadness that an organisation that served us so well in the Second World War just does not seem to care about the niceties any more. — Yours faithfully,