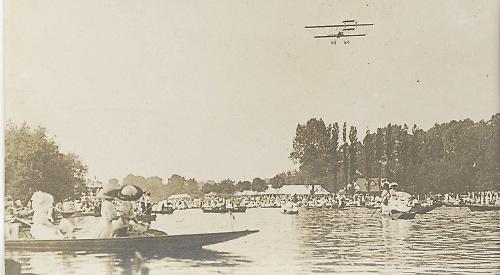 Sir, — Among a collection of photographs of old Henley that I recently inherited was this gem, which seems particularly appropriate for regatta week.

Judging from the ladies’ dresses and hats and the fact that the regatta was suspended during hostilities, the time is evidently pre-First World War.

Note also the lack of booms on the water and the trees growing on what is still called Poplar Point.

However, by far the most fascinating aspect of the scene is the aeroplane and I am indebted to Tim Sims, of the Old Reading History Group, for the following information:

“I reckon the pilot was Douglas Graham Gilmour flying the military version of the Bristol Boxkite on July 7, 1911.

“He flew to Henley Regatta and startled the crowd on the river by swooping down and flying so low that the landing wheels were actually in the water. He was put on ‘trial’ for this escapade and had his certificate taken away for a month. Just seven months later, on February 17, 1912, he made his last flight.

“He left Brooklands for Richmond at 11am. As he was passing over the Old Deer Park, bystanders marvelled at how beautifully the aeroplane was ‘sailing along’.

“Suddenly the machine began to wobble and a moment later one, or both, wings buckled up and the plane ‘dived from a height of about 300ft. The nose buried itself a foot deep in the ground. Graham Gilmour was killed instantly’.”

This is the stuff of derring-do so typical of the Boys’ Own Paper of that time!

Many of the regatta crowd may never have seen an aeroplane before, let alone one performing madcap antics.

Next time you pass Poplar Point spare a thought for Mr Gilmour. — Yours faithfully,