Thank you for making fireworks display one of best ever 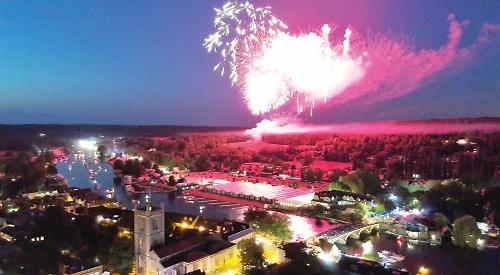 Sir, — We wish to thank those kind and generous people of Henley who dug deep to ensure that this year’s fireworks display on the Saturday of Henley Royal Regatta went ahead successfully.

As readers know, there was a serious risk that the event may have been cancelled due to a lack of funds. However, a last-minute surge of donations saved the day.

There are too many people to thank here but special mention must go to Henley Town Council, the Copas and Crockett families, Leander Club, Brakspear, Henley Royal Regatta, the Angel on the Bridge and a number of others who made generous contributions. They know who they are.

But to all those who donated, even if just a pound or two, our grateful thanks.

We have received a very positive feedback from many local people. Some claim it was the best display they had seen. Thanks, therefore, must also go to John and Rino, of Fantastic Fireworks, which staged the display.

Our apologies, however, to Leander Club. Part of the display was to mark the club’s 200th anniversary. Although the sky over the club was lit up in fireworks with images of a birthday cake and the number 200, the gremlins got in the way and the number “2” was upside down!

This year’s display will be a hard act to follow but our thoughts are now turning towards 2019.

We will do everything we can to establish a plan to make the financing less strenuous.

So any contributions or suggestions by residents, businesses and organisations would be gratefully received. — Yours faithfully,

Richard Reed and Will Hamilton