Surviving slipway in need of repair 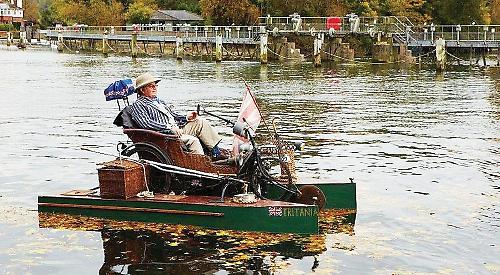 Sir, — Does anyone know who is responsible for Henley’s one and only surviving public slipway? (There were three once!)

Over the past two years the state of the slipway has been deteriorating, namely the concrete just under the water is crumbling away, culminating in a considerable sharp and irregular drop.

While using the slipway during Henley Royal Regatta this crumbling drop has caused considerable damage to my amphibious car.

But I was not the only one affected as I know of others whose vehicles and trailers have been damaged using this slipway. If not attended to soon, Henley’s remaining slipway will be totally unusable and be very expensive to repair.

Loss of this facility would be a great loss the Henley, one of the best-known river towns in the country.

With the various river events held every year in Henley it would be good for the town if the slipway could be repaired.

Please can something be done about this? — Yours faithfully,

Janet Wheeler, clerk to Henley Town Council, responds: “We had this looked at in 2013 by a company called Riverworks — they advised that this slipway is very shallow.

“They said ‘if you disregard the lack of parking and the difficulty backing into the slipway with a trailer when the traffic is busy, generally it is not a bad slipway. The slipway is really only suitable for small open boats due to the depth of the water being shallow.

‘It would not be  possible to excavate the slipway to a much better depth, as the surrounding river bed would fall back into the excavated area over time. To find deeper water would mean extending the slipway out into the river to such a point that the EA would not allow it. To summarise, this slipway is only really suitable for smaller craft.’

“The New Street slipway is also known to silt up after a major flood and there is nowhere to leave the trailer on New Street.”