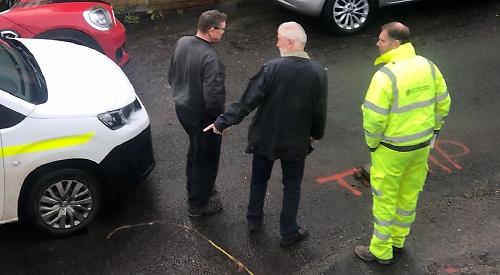 Good progress is being made on Henley’s underground car park… and it seems it is being achieved without any hands-on action from Oxfordshire County Council — could it be a ferret?

But seriously, this was my message to the council on Tuesday last week:

“I reported to the police a sinkhole that suddenly appeared in Greys Hill on the evening of Wednesday, February 26.

“They said they would pass on the report to the highways authority, which I take to be you.

“However, I see there is no sign on your incident map. I placed a bollard next to the hole to alert passing vehicles and pedestrians.

“Workmen filled the hole with tarmac on the following morning, which promptly sank into the hole.

“Three men stood around the hole and looked at it. Since then there has been no action and the hole has widened to twice the size and is continuing to grow. The bollard has been taken away and no warning signage or barriers have been erected.

“It is not rocket science to deduce that it is increasingly dangerous, particularly to cyclists. Does it need an accident before action is taken?” — Yours faithfully,