Teddies in the window anybody? 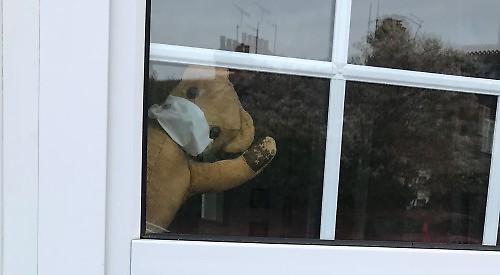 Editor, — Maybe your readers will enjoy this picture, as my neighbours did after the Thursday evening clapping event in support of the NHS.

I sent both it and the message below to neighbours as we have a lot of small children in Vicarage Road. — Yours faithfully,

“The evening’s 8 o’clock ‘Clapping of the National Health staff’ was a lovely event, although of course at the required distance here in Vicarage Road.

“Because a Henley friend had previously told me of the idea of putting teddy bears in windows to get children to enjoy walks by doing ‘a bear hunt’, I put our 50-year-old, but still much loved, Pooh Bear in the bay window and got him to wave to the children and they back.

“Today, I found our cat Boris next to Pooh sitting on his accustomed place in the sun on the back of the bay window sofa and could not resist taking a photo.

“I hope you too are enjoying the result. Will keep Pooh there until all this is over and will also keep my eyes open for more bears.

P.S. Yes, you guessed it, our 15-year-old cat was named Boris after our then MP because they both shared a somewhat dishevelled hairdo!

Sir, — I read an article on the BBC website saying that a mass teddy bear hunt is under way around the world to help distract the millions of children locked down because of the coronavirus pandemic.

Stuffed toys are being placed in windows to give children a fun and safe activity while walking around their neighbourhood with parents.

The hunt is inspired by the children’s book We’re Going on a Bear Hunt, written by UK author Michael Rosen.

Teddies have been spotted around the world, including in the UK.

Have you thought of encouraging the proliferation of teddy bears in windows in Henley? — Yours faithfully,