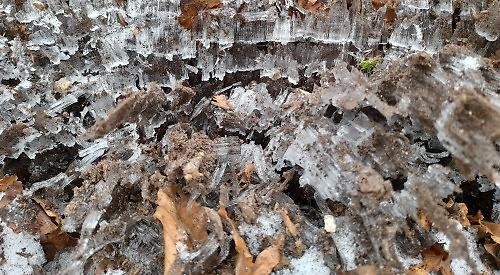 Sharp-eyed: Jane Ingram, from Christmas Common, says: “While out walking the dogs on Sunday and sulking over my lack of Valentine’s cards, I noticed some very unusual ice formations poking up through the tracks so took some pictures. Looking it up on good old Wikipedia, it sounds exactly like needle ice, which is described as ‘a needle-shaped column of ice formed by groundwater. Needle ice forms when the temperature of the soil is above 0C (32 F) and the surface temperature of the air is below 0C. Liquid water underground rises to the surface by capillary action and then freezes and contributes to a growing needle-like ice column’. Hope my pictures are good enough for you to really get an idea of what it was like.”