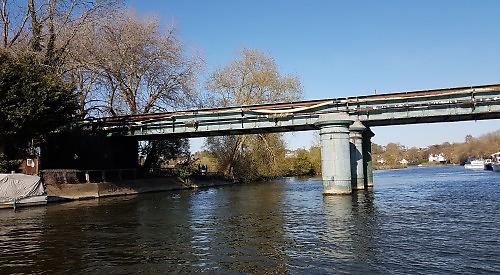 Sir, — I read the proposal for a new footbridge over the Thames from the St George and Dragon pub in Wargrave to Shiplake (Standard, April 23) with interest and concern.

This reach of the River Thames is one of the most beautiful and unspoilt reaches on the entire river. There is roughly 2km of untouched flood plain on the Shiplake side without a single man-made structure.

A bridge here would dominate the river and damage the landscape immeasurably.

While not opposing a footbridge in principle, I do not think the organisers have thought this through. The Wargrave side is a conservation area and a tall concrete structure would cause significant harm.

Noise, light pollution, and the structure itself would disrupt the habitat of many riverside species, including the swans, geese and bats that gather and fly along this stretch of the river.

Construction requires building on zone 1 flood plain and within 8m of the river edge, neither of which is permitted.

Residential properties either side of the St George and Dragon face the prospect of an elevated concrete walkway towering high over their rear gardens. It is not so much a bridge as a flying pub beer garden soaring three storeys into the air and overlooking residents’ houses. The peace and harmony of the river would be ruined forever.

The bridge as depicted would be a danger to river navigation. It obstructs the moorings at the pub, restricting a valuable amenity accessible to all river users.

The views up and down the river that have remained comparatively unchanged for hundreds of years would be destroyed.

Many of these objections do not occur if the proposed footbridge is positioned alongside the existing railway bridge between the two villages. The railway bridge has been there for more than 100 years.

The ecological and visual impact are well-established and irreversible. Ugly though the railway bridge is, a footbridge beside it might actually improve the view with little environmental impact.

A footbridge alongside the existing railway bridge is the only viable location. Concreting over any other part of the river between Wargrave and Shiplake is wholly unacceptable. — Yours faithfully,