Ode to the Queen by Shiplake College’s own poet laureate 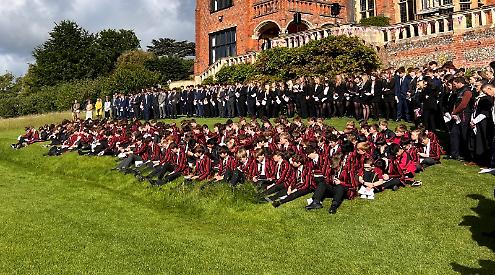 The poem below was written by Shiplake College’s poet laureate Matthew Perry (year 8).

We held an open-air service of thanksgiving to celebrate the Queen’s platinum jubilee on Skipwith Lawn when Matthew read out the poem. — Yours faithfully,

70 years wearing the crown,
People will be talking about the Queen all over town,
She’s 96 years old,
And still the head of the royal household,
She loves her horses,
And gets looked after by armed forces.

The royal guards stand proud,
careful of the crowd,
The royal standard flying high,
I’m sure the Queen waves as she passes by,
She has five castles, too many to list them all,
Windsor Castle and Balmoral Castle, which is quite tall.

The longest reigning monarch in British history,
She is a very special lady as we can all see,
Four children, Charles being the eldest one,
Eight grandchildren and 12 great grandchildren follow on,
Elizabeth Alexandra Mary Windsor are her full names,
She loves watching TV and playing family games

70 years on the throne,
What a great example that she has shown,
She’s got a cocker spaniel, a couple of corgis,
And has had over 30 corgis,
She owns over 100 horses,
And has won lots of money from various racecourses.

The Queen’s platinum jubilee
will be a sight for all to see,
There will be street parties with neighbours and friends,
We hope the bank holiday never ends,
Sandwiches and cakes for all,
Bunting and flags on every wall.

70 years and still going strong,
A reason to party all weekend long,
We should honour her amazing reign,
The likes of which may never be seen again,
So let’s celebrate the jubilee,
With a glass or two of bubbly!