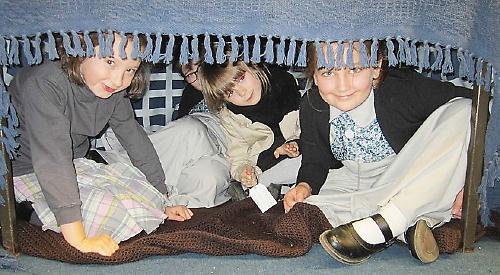 PUPILS at Lewknor Primary School dressed as soldiers and evacuees as part of a project on the two world wars.

They were joined by staff at a special presentation evening for their families to show what they had learned about issues such as rationing.

There was a display of a typical evacuee’s suitcase showing its sparse contents and the children had written diary excerpts about how they imagined what it was like to be an evacuee.

Another display comprised war memorabilia including a tank wheel, grenades, a gas mask and a jerry can as well as gas masks and poppies made by pupils. The school’s reflection room was transformed into “Flanders Field”, complete with lighting and sound effects.

An old Morrison shelter, a cage designed to protect people from falling debris, was set up in a classroom and when a siren sounded the children scrambled inside and remained there until they had been given the all-clear.

Headteacher Deborah Cole said: “The children ended the evening by performing a number of wartime songs in front of an audience of mums, dads and grandparents. Many parents commented on the poignant atmosphere.”