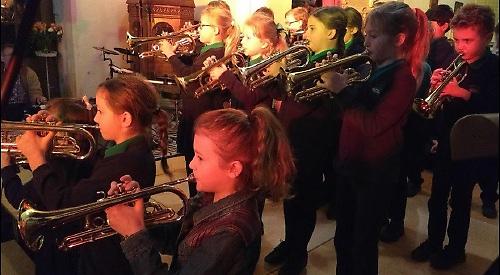 PUPILS, parents and staff from Lewknor Primary School performed at a community concert.

The event at St Margaret’s Church in the village was organised by the Friends of Lewknor School.

The choir sang We Will Rock You, Lewknor followed by a South African song called Azikatale and finished with World In Union, the rugby world cup theme song.

Other performers included year three and four pupils from the school’s cornet orchestra playing C-Jam Blues, Cobbler Cobbler and Abba’s Mamma Mia with which everyone joined in.

Teacher Georgina Lawes sang Are You Lonesome Tonight? as she played the guitar and her partner Mark Wallace played the fiddle.

Pupil Meira Ashby and her father Alan performed a medley of Beatles songs, including Let It Be and Imagine, accompanied by music teacher Terry Lucas on drums. Meira then sang This Is Me, from The Greatest Showman, with her cousin, who played guitar.

Other pupils peformed the duet A Million Dreams and the solo The Greatest Show, which are also from the musical.

Other children performed their own pop song called You Are My Girl and there was a recital of Spike Milligan’s poem On The Ning Nang Nong. Three generations of one family performed Banjo Rag and Little Rhapsody on the piano and drums.

Headteacher Deborah Cole said: “The community concert was a showstopper and featured an impressive display of talent from the very young to the not-so-very- old! All the acts received a well-deserved standing ovation at the end of the night.”