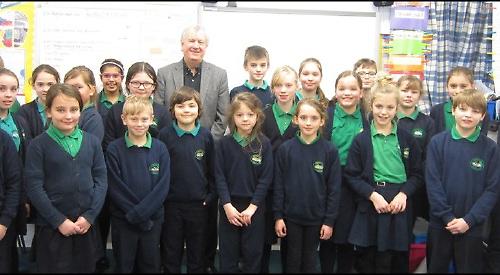 He talked to the upper junior pupils about his life performing around the world, including working with Luciano Pavarotti and performing in front of the Queen.

The children took notes which they later used to write biographies of their visitor. Mr Hughes was born in Wales and wanted to be a church minister but changed his mind when he studied music at secondary school in Cardiff.

When the school’s music teacher left, he approached the headteacher and asked what was going to happen to the school choir.

The headteacher suggested he take it on so — at the age of 15 — he had his first experience of conducting a choir. Mr Hughes went on to study music at Cardiff University and the Royal College of Music in London.

Headteacher Deborah Cole said: “Mr Hughes, who plays piano and trombone, also recalled performing in front of the Queen in a very cold concert hall. The second time they met, the Queen referred back to that first concert and asked Mr Hughes if he had felt the cold as much as she had.

“Mr Hughes said he never wanted to retire but added that he would like to be remembered as ‘a good man, an inspiration to many, and for being kind to everyone’.

“He also said that although his grandchildren enjoyed pop music he thinks it has no purpose and is ‘just noise’!”