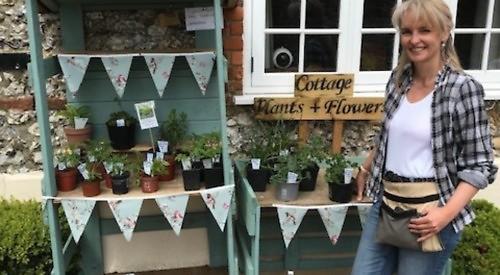 A WOMAN from Lewknor has set up a plant stall in the village.

Emma Rogers, 49, who moved to the village six months ago, noticed that the price of plants and compost in garden centres was rising as a result of Brexit.

She decided to set up her own stall behind the Leathern Bottle selling affordable plants grown in her own garden and greenhouse.

Ms Rogers, who used to run a clothes shop in Chinnor, which had to close because of the pandemic, said: “I set up this plant stall so that I could fund my gardening obsession.

“I used to have another stall I sold plants for charity and raised more than £15,000 for the NHS. I thought ‘this really works’ and that people actually wanted to buy plants grown by local people and wanted to support the charity and local communty.

“The stall has been great so far. I’ve mainly been selling plants that don’t mind a bit of frost. Setting up similar stalls in every village could provide people with affordable and more sustainably-grown plants.”

The plants cost an average of £1 and they are mostly organic. They include cherry and beef tomatoes, courgettes, butternut squash and cucumbers as well as hardy geraniums, golden grass, sunflowers, marigold, kale and herbs.

To grow the plants, Ms Rogers uses the “no dig” gardening method, which avoids digging that can disrupt the soil life as well as important micro-organisms, fungi and worms, which help feed plant roots.