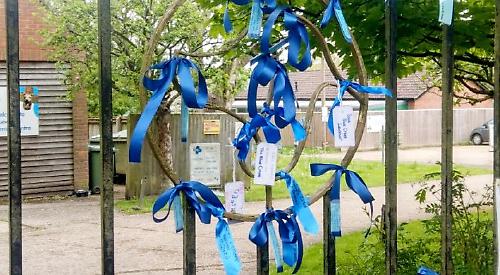 CAMPAIGNERS protested outside a charity’s animal rehoming centre that is facing closure.

More than a dozen people took part in the demonstration at the Blue Cross centre in Lewknor on Wednesday last week.

They held up a “Save Blue Cross Lewknor” banner in front of the main gates in London Road and attached blue ribbons and pictures of rescued animals to the gates.

The national charity says it needs to make £1 million in savings following the coronavirus pandemic and no longer needs the Lewknor centre as its rehoming requirements in this region can be met by its centre in Burford.

Blue Cross says it plans to focus more on remote services and less on physical rehoming centres over the next three years.

Georgina Heritage, who has launched an online petition calling for the centre to stay open, said: “With just days until the consultation period reaches its end, we have been encouraging supporters to tie blue ribbons to the centre gates.

“Many have attached supportive messages and photos of pets adopted from Lewknor. It was very emotional; it was the first time we had got together as a group.

“We were joined by Millie, a lovely dog currently under Lewknor’s care and being fostered by two volunteers. We didn’t encourage more people to come because of the covid restrictions but it was a very emotional moment for us and for the staff at the centre, who feel quite moved by what we are doing.”

The petition has gathered more than 4,000 signatures in only a few weeks.

Ms Heritage said: “We are not going to let it go and will continue the campaign as long as we can. Since starting the petition, I have received so many messages from residents saying that this is just the wrong decision.”

The campaigners also hope to join forces with volunteers at the Blue Cross’s rehoming centre in Cambridge, which is also under threat of closure. They have named this collaboration the Oxford & Cambridge Blues and have gathered more than 27,000 signatures across three petitions.

Ms Heritage said: “The objective of joining forces is to object not only to the closure of our respective rehoming centres but also to object to the three-year strategy recently issued by Blue Cross.

“We question why the charity is proposing the closure of four centres, with 110 redundancies, to save the £1 millon they apparently have to find due to the effects of covid. Yet they state they are planning to spend £1.5 millon on expansion plans.”

She said the charity states that its first objective is to have a local presence yet the proposed closures appeared to contradict this.

Ms Heritage added: “Our priority and focus at all times is the abandoned and homeless pets needing help from charities like Blue Cross.

Lewknor rehoming centre has top-class accommodation for dogs and cats, including kennels that were recently refurbished to the highest standards using funds donated by the public.

“We want to see that accommodation put to its intended use for homeless pets.”

The Lewknor centre, which opened in 2005, has facilities for 24 dogs and 40 cats. Blue Cross says the closures decision was made with “deep regret” following a “challenging” period.

Last month, a spokeswoman told the Henley Standard: “Blue Cross has explored several options to ensure financial sustainability for the charity and its work going forward.

“We are extremely thankful to our dedicated teams for the services they have delivered over the last 12 months in difficult circumstances and what has been a year like no other.

“But, like so many other charities, we are not immune to the effects of the pandemic, which has had a significant impact on our financial position. We need to make £1 million worth of savings in 2021.

“We also need the right structure in place to ensure we are best placed to fulfil our three-year strategy to help more pets and people who need our help across the UK.

“We know this wi!ll be a difficult and unsettling time for those affected. Their wellbeing is of the highest priority to us. Each of our colleagues will be fully supported by our elected employee representatives, their managers and our executive team.

“We also wish to reassure supporters and colleagues while the consultation process is taking place, the charity and its staff and volunteers will still be carrying out all our vital services and support for pet owners.”