Reporter did it by the book — now he has written one 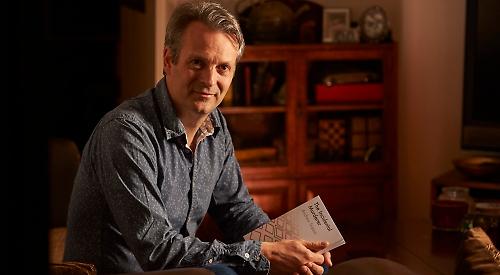 A HENLEY journalist turned civil servant is looking forward to a write Christmas this year — after publishing his first novel.

Andrew Tristem, 48, of Park Road, has drawn on his experiences as a trainee reporter in Somerset to write The Incidental Murderer — the first in a projected series of books about hard-nosed journalist Simon Turner.

Starting out as a cub reporter, Turner goes on a dark journey as he seeks to expose drug and sex scandals at the heart of a criminal council.

Fighting to keep his job, he concludes that the best way of getting a scoop is to “do it yourself”.

Each manufactured story drags him further into criminality as he duels for survival with the council leader — until one of them must pay the ultimate price.

The Incidental Murderer also has something of a philosophical edge, with Tristem posing the question: “Is our character determined by nature or nurture — or is there another force that shapes us?”

The former Trinity, Gillotts and King James’s College pupil now works for Public Health England, an executive agency of the Department of Health, in Didcot.

His grandfather Cyril Tristem had worked as a printer for the Henley Standard and its owners Higgs Group for 60 years until the age of 79, having been apprenticed as a young man.

Tristem’s father Ross was a metallurgist who worked on the hydrogen bomb at Aldermaston after the Second World War, later becoming a Treasury civil servant.

Before training as a journalist, Tristem did a BSc in industrial studies followed by a master’s in business.

“I don’t think those subjects were really me,” he says now. “Probably day one working in business I thought this isn’t really for me, I need to do something else. I tried it for a bit.”

But after five years with Thames Water in Reading, working on IT and strategy, Tristem decided he had had enough.

“I thought the only way to get out of this is to go travelling. I’d always wanted to do that. So I travelled around Australia and South America.”

On his return, knowing that he wanted to write for a living, Tristem enrolled on a three-month course at the London School of Journalism — quite short by industry standards.

“Yeah, very quick!” he says. “My shorthand was pretty much non-existent when I came out of it. I had this sort of high-falutin’ idea that I was going to work for a national straight away. Well, I came down to earth very quickly. Any job then became the goal.

“I went for an interview down at the Western Gazette in Somerset and they were sufficiently impressed by my keenness to put me on a reserve list.

“Then what happened was that a chap who was given the job rushed out after day one, realising it was going to be a really difficult job — you know, a lot of work.”

Just how much, Tristem was about to discover for himself.

“This was in South Somerset, so I was around the area of Langport and Somerton. Small little towns — and from that you had to write seven pages of news every week, including the front page. Which is quite a lot for a little place. And that’s what gave me the idea for the book — I think it’s possibly what inspired it. I had this idea. What if, under this pressure of ‘We’ve never had a blank page’ — as it was put to me — a journalist gets it into his head that he can start making the news himself? You know, a DIY journalist.

“And perhaps in pursuit of a corrupt council something happens and he finds himself a bit trapped by his past behaviour and the situation gets worse and worse and in his mind he can’t really escape this vicious circle. And of course it ends up — each act gets progressively worse!”

Tristem’s novel is, of course, a work of fiction. All the characters are fictitious and any resemblance to actual persons living or dead is purely coincidental.

As the author makes clear, this standard disclaimer applies to him as much as anyone.

“I think with the DIY journalism, maybe that just crept into my head — that perhaps under the massive pressure of having a blank page to fill somebody could do something. People were talking about making up quotes and how as soon as you make up a quote you’ve crossed the line — you’ll never go back. And I never did anything like that, but...” he leaves the thought unfinished.

Having started his reporting career in Somerset in 2002, within three years Tristem would find himself in London, reporting on the July 7 tube and bus bombings.

Newspapers he worked for during his time in the capital included the Metro, the Sunday Express and the Sunday Times. But looking back, he regards his stint on local newspapers as formative.

“I was in Somerset for a year and it was definitely the hardest year of my journalistic career — much harder than when I went to London or worked on any of the national papers I worked on.

Throughout his time in London, Tristem had remained living in Henley — in Niagara Road and later in Park Road, where he lives today with his wife Rebecca, a teacher, and their 19-week-old son Toby.

When his time at the Sunday Express came to an end after two colleagues returned from maternity leave, he was faced with a dilemma.

“I was working long hours and commuting three hours a day. When you finished late on the paper the trains were pretty bad coming back.

“So, six weeks on the Independent or working in PR. It was quite difficult — amazingly — to choose which one, but I went for the PR job.

“That was a while ago now. So perhaps to fulfil the creative side of me again I started writing.

“I first had the idea for this book about eight years ago, but it took me a while to sit down and work out how I was going to structure it.

“It’s a great thing to do and I feel it’s a reasonable achievement to write a book, but what really matters is whether people will like it or not.”

If they do, will readers be hearing any more from Simon Turner?

“If this one takes off then certainly I could do more. One perhaps where he works for a national paper. Another where he’s an editor. I’ve got an idea for another book as well, so...”

l Copies of The Incidental Murderer are available from the Bell Bookshop, priced £7.99. Online, it can be ordered from Amazon, where it is also available as an ebook priced £0.99.