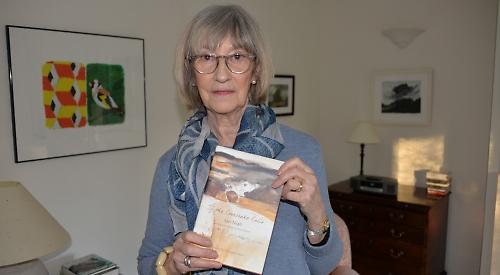 A WOMAN whose father was a prolific nature writer has put together a collection of his work to mark the centenary of his birth.

John McNeillie, better known as Ian Niall, was a novelist and writer who wrote more than 30 books and essays and also had a weekly column in Country Life magazine.

Much of his work was inspired by his childhood in Galloway in
Scotland.

Mr Niall died in 2002 and 12 years later his daughter Sheila Pehrson began to compile an anthology of his works to celebrate his career.

Ms Pehrson, 73, a speech and posture therapist, of Northfield Avenue, Shiplake, spent months looking through her father’s publications before creating If The Corncrake Calls, which was published in September.

Mr Niall was born in Old Kilpatrick but went to live with his father’s family in Wigtownshire when he was three and his sister contracted meningitis.

His new home was a remote farm far away from the technological advances of the early 20th century and this would shape his future writing.

Ms Pehrson said: “He was suddenly given the freedom of the countryside and took to it like a duck to water. He became very involved with nature and enjoyed the freedom it gave him.

“He stayed there until he was eight and those years were very important to him. He never forgot it and said it was an idyllic time.

“Moving to a farm made him a solitary child so he got to know people who worked on the farm. There is also a tradition of storytelling in that part of the world and he was bound up by that.

“Farming methods there were old-fashioned as it was cut off and news took a long time to arrive. His life experiences were in a time warp. His childhood backed up all of his writing.”

After leaving school, Mr Niall worked as a journalist for the West Middlesex Gazette but his ambition was always to write novels.

By the time he was 22 his first novel, Wigtown Ploughman: Part of His Life, had been published.

This followed the life of a young ploughman and caused uproar in some quarters for its depiction of poor living conditions, immorality and violence among agricultural workers.

Ms Pehrson said: “His first book caused a bit of a stir. He drew on his time in Scotland but made the mistake of being too specific on the area and wrote a fairly racy story about ploughmen and agricultural workers. This caused some upset to the people of Galloway, so much so that the Church of Scotland became involved and it was mentioned in the House of Commons.

“It was a bit of a sensation and the result was he got good press for writing it and there was social change and improvement for these workers.” Mr Niall had two more novels published by Putnam but in the late Forties he changed his name and his publisher.

His first novel for new publisher Heinemann was No Resting Place, which sold well and was later made into a film that was shown at the Venice Film Festival and nominated for a BAFTA in 1952. Ms Pehrson said: “It was again about a family in that same part of Scotland. It was presented at Venice so I suppose both of his ‘first’ novels caused a bit of a stir.

“Then in the Fifties he wrote three very important books which are still in print today — The Poacher’s Handbook, Fresh Woods and Pastures New.

“They really established him as a rural writer and around that time he also began to write weekly articles for Country Life. He was very prolific and energetic.”

Ms Pehrson grew up in Wales before moving to Henley in 1969. She lived in Greys Hill, St Andrew’s Road and Paradise Road before moving to Shiplake 10 years ago. She remembers that when she was a child her father would always be writing.

She said: “When I was growing up we lived in a small house in Wales and he wrote in the small room we ate in by the back door.

“He would sit and write on one side of the fireplace and on the other was a toy cupboard. He could write through the noise of family!

“He was often turbulent and needed to be out fishing or in the countryside but he was also a family man.”

It seems Mr Niall influenced his children as his son Andrew McNeillie is a poet and literary editor and Ms Pehrspn herself used to write short stories before deciding to compile a collection of her father’s work.

She said: “In 2014 I began to look at his work to see if I could make a book. I considered doing a bit of everything but found that the nature writing and memoirs made the most powerful version.

“I talked to a couple of publishers who said no but we were then approached by another one to see if we would be happy to have something done with his work. I showed them what I had done and they were very happy.”

Publisher Neil Wilson released the book ahead of the anniversary of Mr Niall’s birth in November and it was launched at the Wigtown Book Festival.

Ms Pehrson wrote the introduction and there is a foreword by Scottish poet Douglas Dunn.

The book is split into chapters on the sense of place, characters Mr Niall used and his growth from child to adult, each with extracts from his work.

The final chapter is an excerpt from Wigtown Ploughman.

Ms Pehrson said: “It wouldn’t be right not to include the beginning and the first chapter of his first novel is there.

“It took me a good six months to put together and then things were tweaked as we went along.”

The book includes illustrations by Barbara Greg from Mr Niall’s original books and the cover features an abstract painting of Scotland by artist Hazel Campbell.

The title, which is a quote from one of Mr Niall’s books, is also a reference to the simple, rudimentary farm he grew up on.

Corncrake birds would often nest in the long grass or corn and could be heard calling out when it was harvested by hand.

When more advanced harvesting machines came into use, the birds would stop building their nests in the vegetation, so farmers would no longer hear their calls.

Ms Pehrson said that, as well as celebrating her father’s work, the book has helped her feel like they were back together.

She said: “It was a very strange experience to be close to him again. I would often talk to him while I was putting the book together.

“I discovered new things and got to know him better.”

l If The Corncrake Calls is available at the Bell Bookshop in Henley for £12.99.