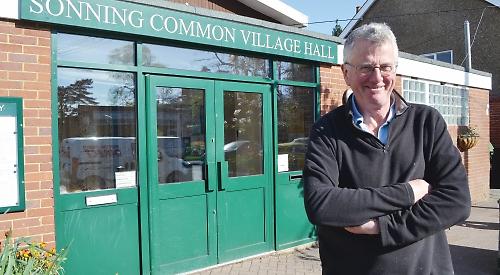 THERE’S no such thing as a typical English village — in South Oxfordshire or anywhere else.

They are all distinctive and each has its own character and oddities, its own problems and pleasures.

My own village is Sonning Common and it is remarkable in its sheer ordinariness. It hardly existed at all 100 years ago, so — unlike many villages around here — is strangely lacking in history.

It has no old or beautiful buildings, no green, no cricket ground, no old church. It does have a pond, but that’s right on the edge of the village and anyway there are many more picturesque village ponds elsewhere.

But think of what we do have here. We have schools, shops, pubs, a thriving health centre and dental surgery. We have a village hall which hums with activity.

We have a host of things going on, from health walks to the Village Gardeners to the magnificent On Your Bike, which filled the lanes around Sonning Common with happy cyclists a couple of weeks ago.

We who live here like it, most of us. I’m not saying it’s exciting — whoever said village life was supposed to be exciting? The teenagers complain about how boring it is and from their perspective they’re right.

But there are severe limits on what a village can do to be exciting — my advice to them is bide your time until you’re old enough to escape to the thrilling towns and cities and maybe think of coming back when you’re older and wiser and in need of some peace and quiet.

In researching my book, I spent many months visiting different parts of the country, cycling around villages of very different kinds, asking people what it was they liked or disliked about where they lived.

One of the things I found out was that many of the villages that are most admired by visitors — the kind of village you see on biscuit tins or postcards — are often simply too good-looking for their own good.

The Cotswolds are full of such places — gorgeous old stone cottages and houses, mellow churches, winding walls covered in climbing roses and the rest of it.

But on a weekday morning, there was hardly a soul to be seen, apart from contract gardeners doing the mowing and blokes working on yet another barn conversion. No shops, no pubs, no schools, no people.

I wondered what all this beauty was for?

There are villages in the Chilterns that come into that category — beautiful almost beyond belief, but so quiet that it’s difficult to imagine that they were ever working settlements where ordinary country people struggled to survive.

Yet that is why they came into existence in the first place — to service the working of the land and the cottage industries, like furniture-making, that evolved later.

I came to realise — and I don’t expect many of those actually living in those chocolate-box villages to agree with me — that our obsession with preserving the old and the beautiful works very strongly against keeping villages alive and thriving.

Conservation Area status, which so often means a blanket ban on new housing, cuts off the flow of new blood that is the only way for villages to renew and sustain themselves.

Without young families and children, the village arteries thicken and the heartbeat slows almost to vanishing point.

Then what do you end up with? The school has closed and very likely the pub too. The village shop is a distant memory, as are the cricket club and the football club. The church is part of a group parish and lucky if it gets a service a fortnight. The ancient cottages, lovingly restored and maintained, become weekend homes.

The link between the village and the working of the land began to weaken in the first half of the 20th century and was broken by the agricultural revolution that followed the Second World War.

Farms that once required a dozen workers now get by with two and a farm labourer has become almost as rare as a corncrake.

Yet the proportion of the population living in villages has steadily increased since 1945 — villages have been taken over by the middle classes, either commuters dependent on their cars, or retirees.

So the local yokels have gone and they will not return. A villager born and bred is a threatened species and one living in the same house as his grandparents is an extreme rarity.

But that has not necessarily meant the death of the village — far from it. What has changed is the nature and character of village life.

In the old days, villagers had no real choice about being part of village life — they were caught up, even trapped, in a web of mutual support and dependence.

But now there is a choice whether to get involved or not. Some decide not to, some are not quite sure how to set about it and others — like me — get sucked in.

The quickest and most common way is to have children and send them to the local school. Once you are on regular duty in the playground, you start chatting to other mums and dads and the next thing you know you’re helping out at the spring fair or the sponsored walk.

In my case I was recruited on to the parish council — that was eight years ago and I’m still looking for a way out!

The population of Sonning Common has risen from about 1,450 in 1952, when it became a parish in its own right, to its current level of around 3,800.

That expansion has largely been in the form of new estates, which in terms of aesthetic appeal are as bland and uninteresting as they are everywhere else.

But those deposits of modern housing have not — at least in my opinion — been such as to overwhelm the village and they have provided the vital lifeblood that has kept the schools, retail outlets and all the other facilities and activities going.

The great question for Sonning Common — as for so many other villages up and down the country — is how much more expansion is possible before it runs the risk of being submerged and losing the very qualities that attract people to live there in the first place.

We always accepted that there would have to be more housing — that is why the parish council organised a neighbourhood plan.

That plan allocated sites for around 200 extra houses and, after a long campaign to win the hearts and minds of the village, achieved a 94 per cent backing in a referendum.

The plan was almost immediately challenged by a major developer who wanted almost 100 houses on a site where we had allocated 26.

We fought the developer and, in a vote which I found enormously heartening, South Oxfordshire District Council’s planning committee backed us unanimously.

That was a great triumph but we do not kid ourselves that it was anything other than one battle in a long campaign.

One of the very many failings of our excuse for a planning system is that the big companies — whether they just go after planning permission and then sell on or actually build the houses — have held the whip hand for too long.

They pay lip service to the need to build sustainable communities but in reality are interested in one thing — securing land with planning permission by any means and building houses for maximum profit.

At long last, neighbourhood plans seem to offer a way to redress the balance by giving villages a significant say in where houses should be built and what kind of homes they should be.

We still need companies to do the building but they should not have control of the process. At the same time, villages have to accept that the homes must be built and that every village has to play its part.

Neighbourhood plans make this possible and they need the unwavering support of district councils as well as the politicians at Westminster.

I genuinely believe that we may have reached a crossroads in the way we meet housing need in this country.

We can blunder along as we have done for too long, allowing the construction industry to dominate the process and leaving local people alienated and betrayed.

Or we can give local democracy the chance to shape a better future for the villages which are, and should remain, the bedrock of country life.

l The Village News is published by Simon & Schuster and costs £14.99. It is available from the Bell Bookshop in Henley.