Eleventh books jamboree is sure to float your boat 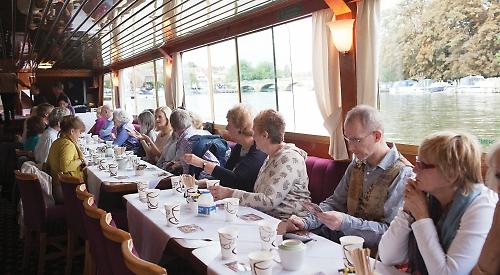 THE week of October 2 to 8 will see household names, leading writers, the national press and thousands of visitors descend on Henley for the town’s 11th annual literary festival. To help navigate the 160 talks, Q&As, workshops and performances for children and adults, festival programming director TOM RYAN and his team have selected 11 things to do at this year’s event

1. Start the festival early with the preview weekend

Head to the Baillie Gifford Festival Hub marquee in Market Place over the weekend of September 30 and October 1.

On the Saturday children aged seven and up can attend free workshops from the Oratory School, while on hold a series of creative writing workshops for ages six to 12. Plus free activities for children of all ages from the River and Rowing Museum team throughout the weekend — while grown-ups can collect their tickets for the week ahead and visit the pop-up Mr Hobbs Gin bar.

2. Hear from some of our leading novelists

From to each day the menu will include smoked pork and beef or falafel hot dogs, noodle ramen pots and a Bowland Forest beef stew, as well as hot, soft and alcoholic drinks. Meal vouchers can be booked in advance at henleyliteraryfestival.co.uk

The club is one of the main festival venues this year, with speakers including Fearne Cotton, Clare Balding, Roy Hattersley, Kate Humble and the Countess of Carnarvon, as well as a day of workshop-style events on the Sunday covering memoirs, crime writing, craft and getting published.

4. Keep children of all ages entertained

Already established as one of the UK’s leading children’s literary festivals, this year sees the age range widened even further with the festival’s first-ever event for babies — a sensory, singalong storytelling with pat-a-cake on .

That same day, pre-schoolers can enjoy award-winning authors and illustrators Steve Antony and Rob Biddulph plus Dozy Bear and The Secret of Food.

On Sunday, October 8, Radio 1 presenters past and present Danny Baker and Greg James discuss their first children’s books, while Costa Children’s Book winner Jason Wallace leads a writing workshop for ages 12 and up.

5. Travel the world without leaving Henley

The festival marks its 11th year with its most international line-up yet — with speakers from Africa, Asia, Europe, the Middle East and North America.

This includes the British Council partnership between Henley and the Appejay Kolkata Literary Festival, marked with the special Night in Calcutta event on the first evening.

British-Nigerian novelists Chibundu Onuzo and Anietie Isong will be in conversation with festival favourite Daniel Hahn, and historian Victor Sebesteyn discusses his biography of Lenin.

The evening of Monday, October 2, sees two of 2017’s most promising debut authors, who both grew up just outside Henley — Laura Kaye and Lulu Allison — in conversation with Pangbourne-based writer Cesca Major.

After a particularly dramatic year at Westminster and beyond, it is no surprise that politics is again prominent at this year’s festival.

8. Meet three of the best new writers on the Thames

The Wildfire Proof Party on Monday, October 2, sees the authors of three of the publisher’s top picks for 2018 in conversation alongside editorial director Alex Clarke aboard Hobbs of Henley’s boat Hibernia.

Each attendee will receive an early copy of all three books — two psychological thrillers and fantasy — plus a glass of Laithwaite’s wine.

Biographer Penny Junor discusses her headline-making life of Camilla Parker Bowles while Princess Diana’s brother Charles Spencer will discuss his new book on Charles II with Henley’s own Mike Read. And Princess Michael of Kent returns to the festival with a memoir her childhood in Africa.

The town square marquee is home not only to the festival box office and a pop-up Bell Bookshop but a wide array of activities and stalls throughout the week.

Over the weekend of the festival, Laithwaite’s have a pop-up shop and a wine bar on the Friday and Saturday nights. Danesfield House will be doing all-day afternoon tea and the Buster Books Corner returns with free children’s activities.

The hub is also host to a wide range of children’s events, including the Butterfly Dance craft workshop, Benji Davies, the illustrator behind the festival’s programme cover, and Danny Baker with Lucie Goose.

11. Head to the River and Rowing Museum for an X-tra special event

In a late addition to the programme, X Factor host and Radio 2 DJ Dermot O’Leary comes to the special setting of the museum’s Rowing Gallery on Sunday, October 8, for a literary festival exclusive event with his much-anticipated first children’s book. He will discuss his career and Toto the Ninja Cat — based on his real-life pet, blind from birth and rescued from an Italian olive grove — accompanied by the book’s illustrator Nick East, a former exhibition designer for the Science Museum.

• For more information and to book tickets, call (01491) 575948 Monday to Friday or visit www.henleyliteraryfestival.co.uk The box office in the town square will be open to callers in person from Saturday, September 30, to Sunday, October 8.