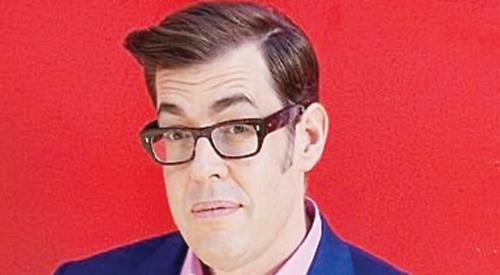 FOR the last three years I have bought 10 tickets for my book group to go and see someone at the Henley Literary Festival.

I managed to get though on the phone as soon as the tickets went on sale and got some of the last remaining ones available to Richard Osman, as he is a very popular choice!

I thought the audience would be all middle-aged women, but I was wrong! It was very mixed, both sexes and all ages. There were quite a lot of younger people.

The Kenton Theatre was full — there wasn’t a spare seat in the house.

Included in the ticket price was Richard’s latest book, The World Cup of Everything, which was there waiting for us on the back of our seats in a useful calico-type “Henley Literary Festival 2017” bag.

The book is a hardback and looks fun! A good start to the evening, everyone loves a take home party bag!

Richard was introduced by a man who then left the stage and Richard was on stage all by himself — a different format to previous talks.

As soon as Richard took to the stage he had the audience in the palm of his hand. He instantly admitted that it was his first visit ever to Henley. Gasps from the audience!

He himself was surprised as he only lives in Chiswick. He asked if there was a Waitrose here as it looked a posh town? Hoots of laughter from the audience.

He went on to tell a story of going into the Chiswick Waitrose and asking for some Maldon Sea Salt. The chap behind the counter said there was none left because everyone had been buying it to grit their drives! Only he told it in a much more witty and amusing way.

He went on to tell us about his book, demonstrating how it works by using well known chocolate bars.

He held up one (a Mint Aero) and asked the audience to cheer loudly if they liked it better than the second one he held up (a Twix).

The Mint Aero won and Richard then turned to the audience asking: “Would anyone like a Twix?” A few hands went up and he threw the Twix into the audience. He was on to a winner giving out free chocolate — everyone loved it.

He then asked us to choose between a Crunchie and a Snickers. Loud cheers for both — from memory the Snickers won.

Some lucky person in the audience got the Crunchie bar. In between the choosing, the banter and the throwing of chocolate Richard told us interesting facts about the bars in question.

This went on until he realised that throwing chocolate bars at the audience didn’t really comply with health and safety rules so some Kenton Theatre volunteers gave them out.

After several rounds of this he asked for some audience members to go up on stage.

Five members of the audience went up — three women and two men.

Richard then started “the world cup of animals”. He read some snippets from the book and then asked the people on stage to move one way or the other to choose between whales and cats.

Cats won, much to the delight of all the cat lovers in the audience.

By now there was quite a lot of banter and participation from the audience! It was all in fun,

Next was sheep versus eagle. The people on stage kept moving, Rabbit versus gorilla, giraffe versus hedgehog, penguin versus cow, etc.

The final choice was tiger versus dog. Richard announced that “The Henley World Cup of Animals winner was ... dogs.” Cheers from the audience, except those who loved cats!

Richard told a risqué joke: Hitler had two dogs, which was awkward for him as he only had one ball! Much guffawing from the audience.

He went on to read a poem about crisps (from his book), then went back to the chocolate bar cheering game, where the audience got cheekier and cheekier, especially those in the first few rows.

Then he talked about the controversial Jaffa Cake conundrum. Namely, is it a biscuit or a cake? Very important questions!

The winner of “the world cup of chocolate bars” was Toblerone! Which Richard was happy to keep and he was also relieved that he didn’t have to throw it into the audience, otherwise he might have caused serious damage. (More laughter.)

Then Richard asked for five more people to go up on stage. Many more volunteers this time — he had to turn some away. He began “the world cup of TV shows”.

The IT Crowd versus The Good Life — lots of murmurs/comments about that from the audience. Next came One Foot in The Grave versus The Royle Family, etc

The winner was Blackadder. Cheers from most people.

By then Richard had run out of time for any questions, which is a shame as it would have been interesting to hear what he had to say on various topics. (No chocolate bar pun intended!)

He apologised for running out of time and not being able to answer any questions, but he said the answer to all your questions is 6ft 7in. Cheers and claps from the audience.

Richard stayed on stage and signed his book. There was a huge queue waiting for him.

There were mixed comments from the 10 of us. Everyone agreed that Richard Osman is a very witty, clever and articulate raconteur, but most thought he ended up doing one game too many and it would have been better to hear about the man behind the quiz shows himself.