It's time to Ma'am up 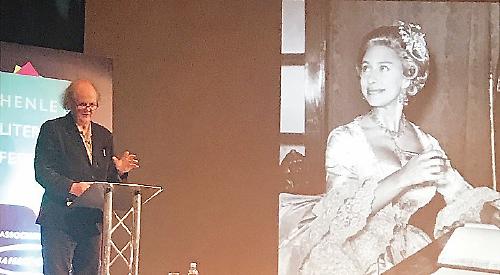 CRAIG Brown had the 9pm bedtime story slot at the Kenton to tell us about Her Royal Highness The Princess Margaret, Countess of Snowdon (1930-2002).

The rather nocturnal Princess would surely have approved the graveyard late hour but someone could have risen to the occasion by giving out Fifties-style HRH Margaretine cocktails, or at least cocoa or something.

But then again while HRH liked a party she, apparently, also liked to make her own and other people’s guests suffer, a bit.

The Princess though one of the most potent examples of the capricious donation of birth has been rather fortunate to have the Mozart-like Brown as her “experimental biographer”.

Brown’s book will win prizes. These national treasures have found each other: while Queen Victoria had John Brown, beyond the grave Princess Margaret has Craig Brown.

Yet, the Princess Brown claims had a form of Royal Tourette’s syndrome, on top of boredom, would no doubt have asked her biographer to have had an haircut.

Brown gathered what tales he could find from the plethora of written and oral sources and made up some, just for us, based on underdeveloped parts of the Princess’ life, such as Picasso’s playful infatuation, which the Princess apparently thought in reality “disgusting”.

The Princess’s story is well known to those over 40 but an obscurity to those younger. Brown read parts of his book and spoke freely, giving a few tantalising and fascinating glimpses of the royal trajectory.

Our most protean parodist has written up our most pickily protean Princess; everyone had met her and she didn’t hold back.

For example, when one loyal earl produced a famous vintage wine she described it as tasting like petrol. At some lunch the carefully produced tea spread was met with “I don’t like tea” — and yet another probably tactless Coronation chicken was greeted with “that looks like sick”.

In the end she died quite young but left two very good children, which tallied with Brown’s suggestion at the outset that in the Royal family some traits skip a generation.

However brilliant Brown was one supposed that HRH would not have been politely listening in the theatre but would have found her way down the corridor to the adjoining jazz bar.

Ma’am Darling by Craig Brown is published by Fourth Estate (£16.99).