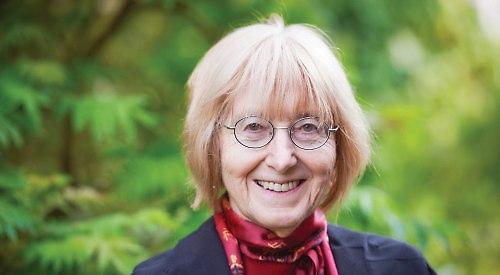 I LOVED the RSC’s joyous revival of Aphra Behn’s The Rover last year, so was looking forward to learning more about its intriguing author — and Janet Todd did not disappoint.

Aided by slides to set the scene, we were whisked straight into the Restoration period. Behn grew up during the English Civil War, which shaped her into a monarchist.

Although little is known of her early life, she was well documented as a Royalist secret agent. However, espionage activities being badly paid — apparently spying was a prolific profession in those days — this led her to play-writing.

Janet informed us that Behn was extraordinary, as she was not just the only professional female playwright but the most performed playwright of her generation.

Following the puritan closures, theatre made a romping return in her era. Women appeared on the stage for the first time and popular plays of the day were sexualised comedies of manners reflecting the immorality of the court.

We had a glamorous picture painted for us of the court and theatre intertwined, with the “merry monarch” Charles II and his many mistresses central to it all.

She disliked democracy, believing the government would be taken over by fools — just fools with good propaganda.

However, this love for the monarchy did not extend beyond James II and she died shortly after the coronation of William and Mary — and so, as Todd put it, “by dying didn’t outlive her age”. And as the age died away, so did her popularity.

Janet Todd, a renowned scholar with non-fiction books on Mary Wollstonecraft and Jane Austen to her name, wore her academia lightly as she talked enthusiastically to us for almost an hour, bringing the excitement of the era to life.

A picture was painted of an extravagant, generous, outgoing woman of wit, for whom “thrift was a low virtue”, whose work was prolific, and whose writing was always equivocal.

There was just time for a couple of well-informed questions before a signing session.

In time-honoured fashion, the audience were left wanting more. And so to the book...