Management in a minute by man who knows 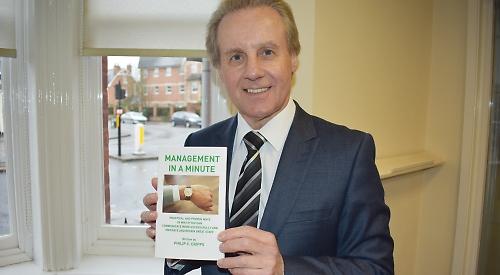 A MANAGEMENT consultant has written a book of tips on how to succeed in business.

His wrote the book, Management In A Minute, in order to pass on his 30 years of expertise.

The book has no chapters or long passages but instead includes about 150 short “messages” as well as advice on issues such as managing people and relationships with others.

Mr Cripps, who has worked with major brands such as Bostik, Nestlé and Compass, was persuaded to write the book by clients who said he had good ideas but needed to convey them in a shorter and more digestible form.

He said: “The book breaks the mould when it comes to management books.

“There are no chapters, no theories and no requirement to follow the conventional approach of reading cover-to-cover. Instead the book contains a series of ‘messages’.  Each one is a powerful, proven and practical technique which can be read in just one minute.

“Thameside International is a very large management consultancy and we work with some major companies around the world.

“Two of the chief executives of these companies prompted me to write this as they had read some of my previous books.

“They said, ‘you’ve got so many ideas but you’ve got to write them in a style that reflects the new generation’ — on Twitter and Instagram people can read and absorb messages very quickly.

“That’s where the idea came from and it has been extremently well-received.”

He has previously written books not only on business but also the paranormal and recently completed a children’s book to be released for Christmas.