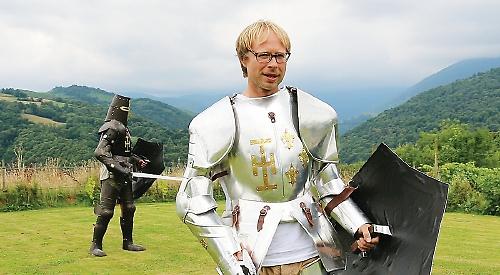 A HENLEY-based publisher of children’s books has announced it is launching a search for “hidden gems” — whether in the form of favourite titles that have not yet been translated into English or that have long since gone out of print.

Monster Books, which is based at The Old Smithy in Hart Street, has as its slogan “Astonishing tales for extraordinary kids.”

The firm is headed up by author Robin Bennett, who last year won an award for his documentary Fantastic Britain exploring the reasons why the UK has produced some of the most widely read and best loved fantasy literature and what this says about us as a nation.

The hour-long film was named best foreign feature at the Hollywood Independent Documentary Awards and has since racked up 8,000 views.

Now Robin is switching his attention to world literature with the launch of Monster Books’ “Hidden Gems” initiative.

This follows the revelation that while translated fiction sells extremely well in this country, only 1.5 per cent of all books published in the UK are translations.

This compares with 12.28 per cent, 15.9 per cent and 19.7 per cent in Germany, France and Italy respectively, according to a study by Literature Across Frontiers.

A spokesman for Monster Books said: “What are we missing out on here in the UK? Based on the stats alone, we think ‘quite a lot’. So Monster Books is looking for hidden classics, forgotten works of genius, your language-locked cultural gems.

“If there’s an author or book you loved as a child but you’ve never seen it available in English and you can’t for the life of you understand why, or there’s someone exciting you have read recently who you feel deserves a wider audience, let us know. This is not limited to foreign titles — if your favourite book is out of print now then we’re interested too.”

Mr Bennett added: “Translating books does for the mind what exotic cooking does for the stomach — it brings diverse people together.

“There is not a single language on the planet that has a monopoly on the total range of human experience, no lexicon that describes every aspect of our feelings, our fears, our hopes and dreams.

“Literary translation strives to address this and its successes make the effort worthwhile. Over the next 12 months, Hidden Gems will be what Monster Books is about, as it launches with new authors.”

Mr Bennett’s own book, Splat! How the Smoothie was Invented — a picture book for six- to eight-year-olds with illustrations by Kate Shannon — is due out this summer.

In the meantime, June will see the launch of the Monster Books “Imaginarium”. Based online, this is billed as “a factory of the imagination for kids to share their story ideas, explore new concepts and engage their inventiveness and creativity at the highest level”.

The Monster Books spokesman added: “The tableau on our website will have winking lights and children can browse these at will.

“The ‘world’ we create will be ever-changing. Click on a fading spark at the entrance of a cave one week and this might lead into an animation of a poem about trolls, or a story about ice witches — or a riddle that needs to be solved to get you through another door to quite another place.

“The portal in the sky could lead to other worlds, or to someone’s life which is a bit like yours. It’s designed to be a shifting narrative that relies on children’s input as much as ours, so users can add ideas, embellish existing ones and generally run riot creatively.”

Mr Bennett said: “Stories help children make sense of the world and how it works. They are communal and have sat at the heart of our humanity since we crouched in caves but looked out at the stars.

“Above all, the Imaginarium is about the glee of discovering something new and exciting. It’s about allowing young minds to delve into new worlds and ideas in their own way.”

Full details of the Imaginarium will be announced nearer the time, but for now anyone wanting to bookmark the page can visit www. monsterbooks.co.uk/imaginarium

For more information, or to recommend a “hidden gem”, visit www.monsterbooks.co.uk