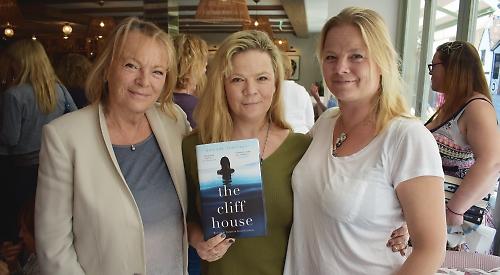 AUTHOR Amanda Jennings launched her new novel at the Coppa Club in Henley.

Mrs Jennings, from Binfield Heath, signed copies of The Cliff House as about 60 guests enjoyed canapés and fizz at the Bell Street restaurant.

The book, her fourth, is set in Eighties Cornwall where Mrs Jennings spent many family holidays as a child. It is a haunting story about a 16-year-old girl who is recovering from the death of her father and her love for a large house on the cliffs above the sea.

Mrs Jennings took about 18 months to write the story and said she was delighted at the positive reception it had already received.

She said: “Henley has been and continues to be a supporter, not just with the readers, friends and family, but also the support of the Bell Bookshop and Henley Literary Festival.

“I feel very much at home at events in Henley and I’m always welcomed brilliantly.”

• The Cliff House is published by HQ and costs £12.99 in hardback and is available as an ebook and audiobook.