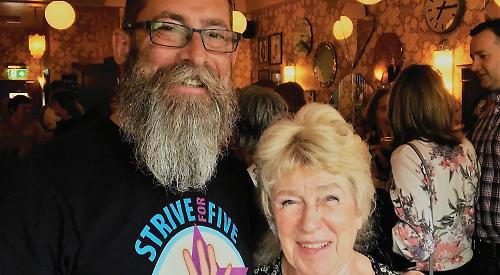 A CAVERSHAM bar and café and a man with stage 4 bowel cancer have raised £5,000 for charity.

The Alto Lounge in Church Street and Steve Clark have held a series of events in aid of Bowel Cancer UK and Beating Bowel Cancer, including a quiz evening, a games night, an open-mic night and bake sales as well as the launch of The Temptation, a book written by Vera Morris, a former headteacher at Chiltern Edge School in Sonning Common.

More than 100 people attended the launch, including some of Mrs Morris’s former pupils, and 60 copies of the book were sold in the first hour.

Mr Clark, 54, from Reading, was diagnosed in May 2013 and launched his Strive for Five campaign to raise awareness of bowel cancer and mark his five years of survival.

He said: “It is all about sharing stories of hope for people like me.”

Bowel cancer is the second biggest cancer killer in the UK, with nearly 16,000 deaths each year but it is treatable and curable especially if diagnosed early.

Mr Clark and Mrs Morris are pictured together at the book launch.