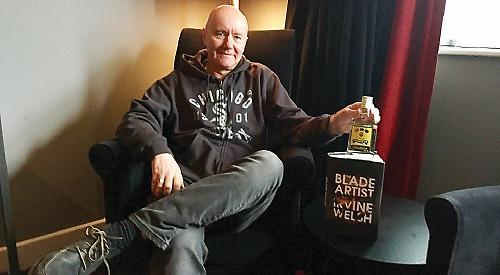 THEY were back on our cinema screens last year — Renton, Sick Boy, Spud and Begbie. The Trainspotting crew. Twenty years older but not necessarily wiser.

Now they’re back on the page too, courtesy of author Irvine Welsh’s 11th novel — the ominously titled Dead Men’s Trousers.

Mark Renton is finally a success. An international jet-setter, he now makes significant money managing DJs, but the constant travel, airport lounges, soulless hotel rooms and broken relationships have left him dissatisfied with his life.

He’s then rocked by a chance encounter with Francis Begbie, from whom he’d been hiding for years after a terrible betrayal — the one seen at the end of the original Trainspotting film.

But the psychotic Begbie appears to have reinvented himself as a celebrated artist and — much to Mark’s astonishment — doesn’t seem interested in revenge. Can that really be the end of the matter?

Published in March this year, when it became an immediate bestseller, Dead Men’s Trousers is the fifth of Welsh’s books to feature the characters from his 1993 debut.

Later this month, the Leith-born author is appearing at the Henley Literary Festival to talk about what his creations are up to these days.

Welsh, 59, who now lives in Miami, clearly relished the success of last year’s T2 Trainspotting film sequel, which saw him reprise his role as the raffish drug dealer Mikey Forrester.

Having made his mark on the page, stage and big screen, the author is now keen to explore the possibilities presented by television.

“I’m working on loads and loads of stuff,” he says. “I’m working on lots of TV projects over here in America. I’ve got a big series of pitch meetings next week on one and I’ve got another one that we’re setting up a company to do.

“I mean, I’ve got a lot of stuff on the go, but the thing about TV and cinema is that nothing’s happening until it is, so you never really know what’s going to follow on.”

Welsh likes to keep busy. Last year he told an interviewer: “I find it very difficult to sit around and do nothing. I’ve got to have projects on the go because the devil makes work for idle hands. I’ve got to be going forward all the time. If I don’t have something to do, I’m not the kind of person who can sit on a beach on holiday. I’ve got to go and check things out and see things and look at things, and have some kind of itinerary in my mind.

“I think a lot of people who are in some ways successful are kind of like that — I’ve noticed that in all walks of life. You want to be constantly moving into the next thing, you’re disinclined to reflect and to kick back and relax. You want to keep going.”

The author, who turns 60 later this month, has been true to his word this year.

“Living in Miami, I’ve been spending a lot of time in South and Central America, working things out down there. And I’ve got a big Australian tour with my last book [2016’s The Blade Artist] before I go to Henley.”

Anyone who read Trainspotting and saw Danny Boyle’s film would have been struck by how much of the novel failed to make it into the latter. Does television offer Welsh a chance to make the most of those unused scenes and stories?

“Yeah, I think it does in a way. In a long-form TV series you can use that material a lot more than you do with cinema, where you have to make a lot of tough decisions about what goes in and what goes out. A long-form TV series is just basically a kind of filmed novel, so you can put as much in as you like, really, and you can spend a lot more time building characters. Whereas with cinema the audience just wants to see a movie — they want to see something that moves along and finishes in 90 minutes. But I think a long-form TV show or novel asks different things of an audience than a film does.”

TV drama seems to have spent the last 20 years catching up with cinema — as witnessed by the success of Game of Thrones and its many competitors.

“Shows like The Sopranos and all that were game-changers,” says Welsh. “I think it’s just the technology, you know? People have got massive big flat screens in their house, you know? And if you have that kind of technology you want production values. So they really have to spend money on TV to get people to watch TV now. I’m not going to watch something that’s got wobbling kind of scenery.”

Looking back at the success of Danny Boyle’s Trainspotting, what was it like for Welsh to see his stories and his characters made into such a seminal film?

“It was great, and when you see characters realised in the cinema — or on stage, even — it’s just a great buzz seeing the actors kind of become these characters and saying the words and all that kind of stuff, you know? It gives it another dimension, really. I mean, it’s very abstract in a sense — you’re kind of working on this page and you’re trying to authenticate the characters as much as you can and make them as three-dimensional as possible, but when an actor comes out and plays the character it’s great fun to look at.”

While the Trainspotting crew are far from being Welsh’s only fictional protagonists, they have been at the heart of his success as an author.

“Yeah, I mean, I do like them and I certainly write a lot about them — and I’ve got a lot of unpublished stuff that I’ve written about them over the years. So you do get into them, basically, you do get into the characters. You know, they’re tools to tell a certain story with, to do a certain job, but they do become interesting — they do kind of take on a life of their own.”

Welsh is happy to acknowledge the parallels that exist between his own life and that of his creations, particularly Renton. But that’s far from being the whole story.

“You do draw on your own experience, but you never really know how much like the characters are you and how much of them are in you — and you’re probably not the best person to ask because I think we’re all strangers to ourselves, you know?

Having previously lived in Dublin, Welsh moved to the US in 2009, initially settling in Chicago. But there are signs he might be looking to return to Blighty.

“I’ve been out here for 10 years now,” he says. “I’m back about three months of the year to the UK and I’ve been talking about coming back for years and years — and I might, you know? I’m looking at flats back in London and stuff like that. So I probably will spend a lot more time back in the UK. Obviously it would be nice to be back, but when you’re in Miami it’s very hard to kind of shift yourself from here, you know?”

• The 2018 Henley Literary Festival runs from Saturday, September 29, to Sunday, October 7. Irvine Welsh is appearing at the Festival Hub at 5pm on the opening day. The event is currently sold out, but to join the waiting list for returns, call the festival box office on (01491) 575948. For more information, visit www.henleyliteraryfestival.co.uk