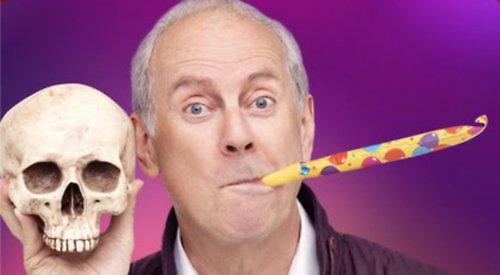 WRITER, broadcaster, actor, not to mention a former MP, government whip and Lord Commissioner of the Treasury — Gyles Brandreth is many things to many people.

A regular on The One Show and Countdown’s Dictionary Corner, his near-annual appearances at the Henley Literary Festival are among the event’s hottest tickets.

Last August he enjoyed one of his greatest successes of recent years when he took his five star-rated one-man show Break a Leg! to the Edinburgh Fringe Festival — and saw it completely sell out.

Not surprisingly, this has inspired him to embark on a four-month UK tour that will take him all the way up to the start of this year’s Edinburgh festivities.

Break a Leg! visits Norden Farm Centre for the Arts in Maidenhead next Saturday and Sunday (April 13 and 14). Other dates include Newbury’s Arlington Arts Centre on Saturday, May 18, and the Cornerstone Arts Centre in Didcot on Sunday, June 30.

A spokesman for the show said: “Break a Leg! is Gyles Brandreth’s riotous celebration of all things theatrical. This is Brandreth unleashed on the stars he’s known and the theatre stories that have made him laugh — and occasionally cry.

“Without hesitation or repetition, but just a touch of deviation, Just a Minute regular Gyles delivers a dazzling evening of wit, wisdom, high drama, low comedy and hilarious name-dropping. They say all political careers end in tears, but in the case of Gyles it seems it’s tears of laughter. He’s won the Most Popular Show at the Fringe award and a record number of
five-star reviews.”

A former president of the Oxford Union, Brandreth’s theatrical CV includes roles in Twelfth Night: The Musical and Hamlet at London’s Park Theatre. The author of numerous works of fiction and non-fiction, he is also one of Britain’s busiest after-dinner speakers and award ceremony hosts. But when did he first discover his love for acting and comedy?

“When I was at school. I was 10 when I played Rosalind in As You Like It. I have always liked dressing up. Only a year or two ago, I played Lady Bracknell in a musical version of The Importance of Being Earnest.”

Who were his inspirations growing up? “The comedians I heard on the radio when I was a little boy — people like Tony Hancock, Kenneth Williams and Frankie Howerd. Later on I got to know some of them and I tell some funny stories about them in the show.

“The first radio show that I listened to regularly was Take It From Here, which featured Jimmy Edwards and a very young June Whitfield. June and I recorded a song together last year, not long before she died, and, at her suggestion, I’m doing a little duet with her in the show. She’s on the radio and I’m on the stage. It’s a special moment because she was such a special lady.”

So where did the idea for Break a Leg! come from?

Brandreth said: “I have always loved the theatre and have met and worked with some great actors and entertainers over the years, from Laurence Olivier and Judi Dench to Lady Gaga and Jack Whitehall. They all feature in the show, which is really a live theatre celebration of live theatre!

“There are lots of funny stories of what I’ve learned from some of the greats I’ve known — and tales of theatrical disasters. People particularly seem to enjoy hearing about the masterclass Roger Moore gave me on the secret of film acting.”

The 37-date Break a Leg! tour started on Saturday in Colchester and runs until the end of July.

Brandreth said: “I love appearing in all sorts of theatres — from very old ones to very new ones. What I find exciting is being with a live audience. I also quite like it when the unexpected happens and things go wrong. I tell the audience they don’t have to turn off their mobile phones — the interruptions may be the best part of the show!

“Chipping Norton is one of my favourite theatres. The last time I was there my wife couldn’t make it, so my publisher came along and pretended to be my wife. No one seemed to mind. They kept asking her, ‘How do you put up with him?’ She said, ‘He’s not that bad.’ I think it’s important to go back to the same theatres if you’ve enjoyed them. I like building a rapport with the audience and because I’m going back to places my real wife makes sure that everything in the show is new.

“This show is definitely different — there’s music as well as laughs. We were very lucky. When it opened in Edinburgh, we got lots of five-star reviews and sold out.” Brandreth clearly thrives on being on the go, but he also likes to challenge himself when taking a break.

“I love words and word games,” he said. “I am the founder of the National Scrabble Championship. I play Scrabble and I collect interesting and new words. I am doing a podcast with my friend Susie Dent from Countdown’s Dictionary Corner and am learning lots from her. I recently discovered that ‘yex’ — a very good word for Scrabble — is an Old English word for hiccup.”

The former Conservative politician was pushed into becoming an entertainer when he left office but admits he loves the variety of work it provided him.

“This is Plan B,” Brandreth said. “Plan A was that I was going to be prime minister. I know there are some people out there who wish I was prime minister! I was an MP for five years in the Nineties — until the people spoke! My wife said, ‘Gyles, listen to the people,’ so I did. I’m very happy with the variety of my life — appearing on The One Show and Just a Minute, writing books and doing live shows like this.

“I have written seven murder mysteries, detective stories set in the 1890s featuring Oscar Wilde and Arthur Conan Doyle as my detectives. There is talk of the latest one — Jack the Ripper: Case Closed — being turned into a movie. I’d love that.”

And if he could actually travel back in history, where would he most like to go back to?

“I would love to go back to the London of the 1890s and discover if Oscar Wilde really was as witty as everyone says — but actually I rather like living in the here and now. I don’t want to go back. I want to go forward and see what the future brings.”