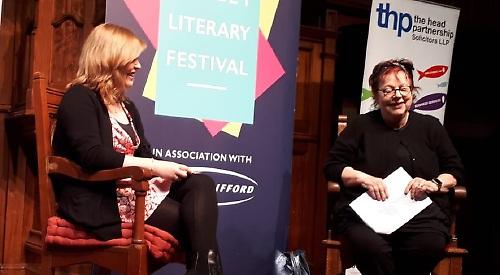 JO BRAND apologised for her remark about throwing battery acid at politicians during an appearance in Henley.

She was criticised after joking on BBC Radio 4’s Heresy programme about throwing acid instead of milkshakes at “unpleasant characters”.

Brexit Party leader Nigel Farage, who had milkshake thrown over him during the European election campaign last month, accused Brand of inciting violence.

The 61-year-old comedian said she had been “insensitive” and would like to “humbly apologise”.

Speaking at a special Henley Literary Festival event at Christ Church, she said she wanted to respond to the “complete storm” on social media.

She said the show, which was broadcast on Tuesday evening last week, was set up for comedians to argue points from an unreasonable position for so-called comic effect.

Brand told the sell-out audience: “What I said was an attempt to joke and I have to say I didn’t mention anybody by name — I certainly didn’t mention Nigel Farage — but it was about people having milkshakes thrown at them.

“And I said, you know, wouldn’t it be better if they were throwing something like battery acid?

“Now I know most people would think that’s a very tasteless joke but having said that, I said, obviously, I would never do anything like that, that’s complete fantasy, and I’m sorry.”

In the show, Brand told presenter Victoria Coren Mitchell: “Certain unpleasant characters are being thrown to the fore and they’re very, very easy to hate. And I’m kind of thinking, ‘why bother with a milkshake when you could get some battery acid?’”

After laughter from the audience, she added: “That’s just me. I’m not going to do it, it’s purely a fantasy. But I think milkshakes are pathetic, I honestly do. Sorry.”

Following the broadcast, she was condemned by critics on social media and Ofcom said it had received 65 complaints.

Writing on Twitter, Mr Farage said: “I am sick to death of overpaid, left-wing, so-called comedians on the BBC who think their view is morally superior. Can you imagine the reaction if I had said the same thing as Jo Brand?”

Prime Minister Theresa May said the BBC should explain why the joke had been deemed “appropriate content” for broadcast and the corporation edited the joke out of a repeat of the programme. Brand accused Mr Farage of editing her comments, saying: “The second part of the sentence qualified to some extent what I’d just said but that bit was left out completely, so it just looked like I’d done the joke.”

She added: “I felt that I was fulfilling the brief of the show. It’s not a live show, it’s edited, and so I had absolutely no control over what they decided to put out.”

Asked if she felt she had been let down by the show’s editors, she said: “I would never try to lay the blame at someone else’s door. I mean, the fact that they thought that was okay to go through was a decision that they made independently of me and I don’t feel that I want to criticise them for that.

“From my own point of view, I think the joke that I did was crass and it was clumsy. And the thing is, as a comedian, you know, you’re not perfect all the time… sometimes you just say something crass and you think ‘I wish I hadn’t said that’.

“[But] I’m not trying to get myself off the hook. I take full responsibility for what I did.

“I realised that a lot of people would think the joke that I did was very tasteless. When I was younger the whole issue of throwing acid at people was not around at all and in some way — and I don’t know how I did this — I just bypassed and forgot that it has been a big issue. What I said was insensitive and I really would like to apologise to anyone who’s either suffered that sort of attack or knows someone who has. I humbly apologise for that and I really didn’t mean to hurt anyone.

“I am not inciting anyone to do anything and I am not a politician — I’m just responsible for myself and what I say, which is very different.”

The comedian was promoting her latest book Born Lippy and made two appearances at the Reading Road church on the day.

The radio show’s creator, David Baddiel, accused the BBC of being “a bit cowardly” for removing the joke from the repeat.

Speaking on the BBC’s Newsnight, he said: “I don’t think I would have nipped it out. Morally wrong? I’m not sure. I think they’re just trying not to cause trouble.

“If it was up to me, I would have kept that line in for the repeat. Apart from anything, it’s a bit silly to cut it out when it has had massive coverage — that looks a bit cowardly.”

The BBC said it regretted any offence caused and the programme was “never intended to encourage or condone violence”.

The Metropolitan Police confirmed it had received an allegation of incitement to violence but said that no further action would be taken.