Comic jokes as naturally as the rest of us breathe 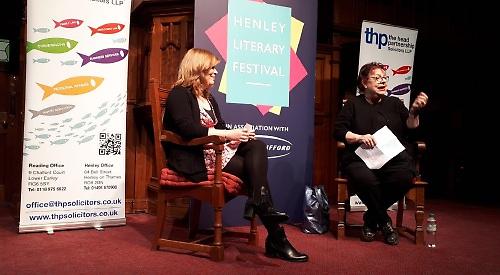 IT was like chatting to an old friend last Thursday night when Jo Brand walked on to the stage of the Christ Church Centre.

She is at home with an audience and cracks jokes as naturally as the rest of us breathe. At times, her interviewer Francesca Perryman was almost laughing too much to ask questions.

But for a woman who doesn’t seem to take herself very seriously — one piece of advice she kept repeating, was don’t worry what people think of you — Brand had a lot of serious advice. It was both a thoughtful and hilarious interview.

Similarly, her book, Born Lippy: How to Do Female is packed full of anecdotes, jokes and useful tips about life as a woman.

Brand said it is intended as a “tongue in cheek” advice book and advised the audience, in her typical self-deprecating manner, that it is “best kept by the toilet for short reads” and that if they don’t like it they can “put it down the toilet”.

Brand is full of wisdom but describes herself as “an empty cupboard of knowledge”, adding that “being funny is the best way to express yourself”.

In her opinion, humour breaks down barriers and allows her to talk about issues more openly — many to do with the struggles women face. Back when she started on the comedy circuit there were nowhere near as many women about.

It is her (perhaps controversial) belief that men think women cannot be funny and if you are a bad female comedian it is because you are a woman, not just a bad comedian.

During the early stages of her career in London, there were just 15 female comedians to 200 men. Now, thankfully, she says, there is a 50-50 split.

But during her time touring she encountered her fair share of abuse and quickly learnt how to deal with the (usually male) hecklers. She described her system of graded putdowns, ranging from mild and sweet to nuclear — and while she gave examples, it’s best for them to be imagined rather than risk offence!

And so she is a tough woman. She has earned her place as one of this country’s most loved comedians through hard work, determination and a few pints of beer over her head.

Inspired by the likes of French and Saunders and Victoria Wood, she thinks the best comedy comes from women who don’t mind looking stupid for the sake of a laugh. She said laughter comes when you look like you don’t care what others think. That is perhaps a great lesson for life.

Brand is unafraid and outspoken, she is witty but there is seriousness at the heart of her comedy.

During the one-hour interview she covered everything from internet trolls, social media, periods, the menopause, politics, mental health, parenting and her husband.

But most importantly the audience found laughter in the everyday. It felt personal, as comfortable as a good old natter over a cup of tea, and everyone walked out smiling.