Inside the London Library 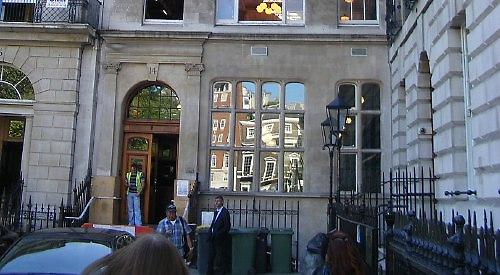 THIS panel discussion, chaired by Giles Milton, was packed with fascinating facts and information, similar to the miles of shelves in The London Library.

Holding over a million books, as the title of the event suggests, it is a treasure trove for writers to explore.

The panel consisting of Victoria Hislop, Abi Daré and Travis Elborough walked us through the library, telling us how they use it and what they love about it.

Started in 1841 by Thomas Carlyle, it had just a few thousand volumes, now more than 7,000 books are purchased a year and there are 60,000 special editions which can be viewed, such as the first edition of the King James Bible, a book written by a young Henry VIII in defence of the Catholic faith, and a theses of Martin Luther. As the panel agreed, being in the library is like “breathing in history”.

Surrounded by such a wealth of information, it is a haven for writers and through the years it has welcomed the likes of Dickens, Darwin, Virginia Woolf and Bram Stoker.

Today, writers can always be found writing, reading or socialising in the café.

Travis Elborough joked that he believes he has accrued a vitamin D deficiency owing to the amount of time he has spent in the topography section of the basement. Hislop, laughing, said she has written four out of her six books in the library.

The panel all agreed that it is a place to balance ideas and a support network. There is a camaraderie among the writers — they don’t dismiss each other.

Daré, a debut novelist, said it reassures her to hear the keys of other writers’ laptops clicking away, making her believe she can do it too.

The audience had many questions for the panel and one that came up several times was whether it is a distraction to be surrounded by so much information? How do you know what to use and what to leave behind?

Hislop said she can spend days reading for something that might only take up half a page in her novel. But that isn’t a bad thing. It is immersion in the facts of your story.

Elborough agreed, saying he often discovers information that begins entirely new projects, and Milton said he has written books he never planned to write because of information he has stumbled across.

Daré said the library inspires her and when she is struggling to focus she only needs to pull a book from the shelf and words flood her and she starts to write.

Daré is part of the Emerging Writers Programme, which offers new and aspiring writers the opportunity to meet and supports them with masterclasses, peer groups and monthly meetings. Daré says without it she couldn’t write.

The life of a writer can be a lonely one and the library provides “the comfort of silent human company”, as Hislop describes it.

Phones are not allowed and coffee, tea and chit-chat are all reserved for the café. Everyone respects the books, respects the work, respects each other.

Tucked away in St James’s Square, it appears to be a small building, says Milton, who is on the board of trustees, but inside, it stretches back and up over five floors. It is a special place and on Friday, we were lucky enough to peep inside, open the covers and hear its story.