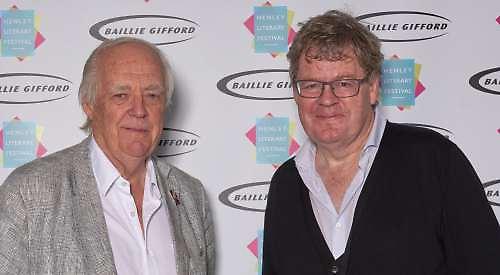 IN and around the bar at Phyllis Court there was a lot of excitement and anticipation from patrons waiting to enter the Finlay Suite. I certainly felt it.

From the hubbub of conversations going on around, you could pick out titles such as Jesus Christ Superstar, Evita, The Lion King and so on.

It called to mind the atmosphere prior to entering the theatre when I went to see Luciano Pavarotti in London some years ago.

This was a rare opportunity — the queuing patrons ready to go and secure a good view of the stage and the legendary master lyricist.

Fellow festival author James Runcie was the interviewer. He and Sir Tim were relaxed, funny and incredibly warm, which spread through the audience.

I was completely transfixed — it was like witnessing an intimate conversation between Mr Runcie and Sir Tim, and thus this was indeed just effortless natural artistry on both their parts.

Then Mr Runcie invited questions from the floor, which were indeed varied.

Sir Tim was asked what he felt about biopic or jukebox-style musicals. He said: “Some artists’ storylines are quite compelling. Jersey Boys for example, a biopic about Frankie Valli and the Four Seasons, is just terrific. Mamma Mia also with the music and lyrics of Björn and Benny, whom I adore, with a humorous and at times tongue in cheek storyline serves these incredible songs very well. Hence Mamma Mia is indeed still running. To this day. But on the question of what’s my view on them, well, I suppose it’s better to have a weaker storyline and wonderful music than a strong storyline within an awful musical.”

The question of bad reviews came up. Sir Tim was asked how he felt generally about bad reviews he’d had in the past and how did he deal with it? Now this was funny.

As a musical theatre actor by trade, I had played the role of Juan Perón in the 40th anniversary UK/international tour of Evita in 2018-19.

I’d not met Sir Tim before, but on this occasion we exchanged a few words from the floor to the stage when I asked which was was his greatest love affair and achievement with his work.

His reply was not a surprise. “Evita,” he said. For me too, the music and lyrics of, for example, She is a Diamond and of course the final scene, would completely wipe me out each night emotionally.

“An incredible work, Sir Tim,” I said. “Thank you for the gift.” His reply: “Well, thank you too for the warbling!” I have to say I felt a bit emotional, with a bit of a giggle going on.

The final question saw Sir Tim asked if he ever lay awake in bed at night thinking “Ah, I wish I’d written THAT lyric.”

Sir Tim is a man in my opinion who has taken his art to a level most lyricists can only dream of and indeed takes his art very seriously. Naturally, however, he doesn’t take himself too seriously. I’d go as far as to say that his presence on the stage together with James Runcie was one of the most or indeed the most personable and enjoyable presentations of this kind I have ever witnessed.

All in the wonderful surroundings of Phyllis Court, which was the perfect venue for this delightful evening.