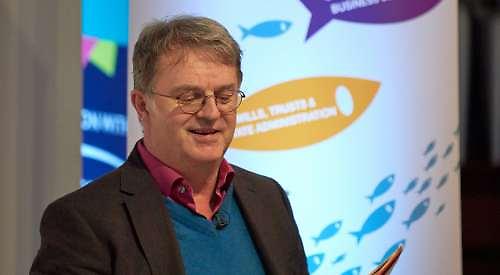 HAVING been a lifelong fan of Have I Got News for You, I have often wondered what the appeal of Paul Merton’s humour was to me. Seeing him in conversation with Daniel Hahn, I now realise he is a fusion of many of the humorists who have made me laugh over the years.

From Max Miller to PG Wodehouse, from Spike Milligan and The Goon Show to Tony Hancock and the scripts of Galton and Simpson, Paul has a little bit of them all.

He is known for his improvisation, deadpan, surreal and sometimes dark humour and is rated by his peers as one of our greatest comedians.

Born in Parsons Green, London in 1957, his father was a train driver but from an early age Paul knew he wanted to perform.

At four or five years old he was taken to a Bertram Mills circus and was captivated by the clowns — not realising, following a fairly strict upbringing, that adults were allowed to act in that way. He was hooked. It wasn’t until 1982 when his dream was realised and he made his first appearance at The Comedy Store, a venue with which he is still associated.

For many years Paul has been a team captain on Have I Got News for You and he is the second most regular panellist on BBC Radio 4’s Just a Minute (Clement Freud has the most appearances).

Paul has written or
co-authored five books and his sixth, Funny Ha, Ha, 80 of the Funniest Stories Ever Written, will be released in November.

Appearing in front of a sell-out audience at the Christ Church Centre, you felt he could have entertained us for hours more.