Shedding tears for the Iron Lady 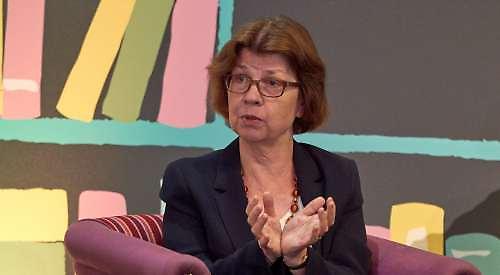 “I RESPECTED her [Mrs Thatcher], I learned from her but no, I didn’t like her,” said Caroline Slocock, former civil servant and the first female private secretary to serve inside Downing Street.

Slocock witnessed, first hand, Thatcher’s final cabinet meeting in which she read her resignation letter to her cabinet, choked with tears.

Admitting that she also cried at the betrayal, Slocock said it was “terrible to see the ending” of Thatcher’s reign.

Slocock was a wonderful speaker, holding the audience rapt with her stories and her insight.

Her unique take on Margaret Thatcher was utterly compelling and she offered a very fair assessment of Thatcher as a boss and as a leader, speaking of her as a “very nice boss” who was “more insecure than people realised, always seeing potential threats around her”.

Slocock also, and quite rightly given the current climate, spoke about “the erosion of the ability of the civil service to do it’s job” and Thatcher’s opinions on Europe.

Explaining how Thatcher might have dealt with the current situation, Slocock also offered the thought that if Thatcher had been in Cameron’s place, she would have negotiated a much better deal with the EU, making the referendum totally unnecessary.

This was a fantastic Henley Literary Festival event with an intelligent and interesting guest, a skilled interviewer and a story that held the attention.

Whatever your views might be on Margaret Thatcher, she was an extraordinary woman and it was a treat to hear from someone who witnessed such a historic time at first hand.