Batsman is a genuine all-rounder 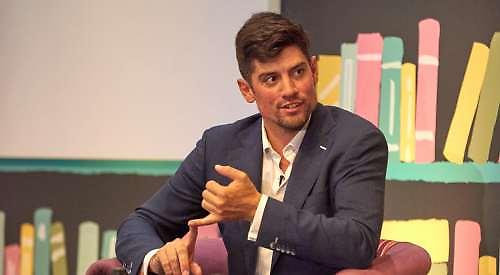 THIS might have been one of the last events of the 2019 literary festival, but it was the first ever time authors Jojo Moyes and David Nicholls had appeared together. Between them they have sold millions of books and are recognised internationally as bestselling authors.

There was an excited buzz in the room before they stepped on stage, and they were welcomed with an outstanding round of applause.

Both authors talked about their new books. Moyes’s novel The Giver of Stars is based in Kentucky during the Depression era and focuses on a group of women with a mission to spread the love of reading — something JoJo is very good at herself.

Nicholls’s new book Sweet Sorrow is about first love, but as he said on Sunday he takes a “melancholy perspective” looking at first love retrospectively.

The evening was a celebration of love. It is a common theme in both novelists’ work and they talked about their different approaches to the subject.

Jojo writes about past events — she researches and travels to ensure facts are correct. Nicholls, on the other hand, is not a so much of a research-based writer.

He admitted that he has never written outside the span of his lifetime but said he does carry out some research.

For his 2014 novel Us he said he had travelled around Europe to ensure the exact details of places, but he just doesn’t venture into different time periods in his writing as Moyes does.

For Moyes, whose book is set in Kentucky, it was important for her to visit the place. She wanted to “capture the rhythm of the language of Kentucky”, which she did very successfully — even treating us to the accent when telling stories us about it.

In particular, she described a woman named Barbara who she stayed with and who the book is now dedicated to. Moyes said with true affection that Barbara became “the formative spirit of the book”.

And so on Sunday evening, we explored love in its many forms: first love, jaded love, love of place, of writing, of books and reading. Moyes is passionate about reading and not only does her new book champion libraries but she is also campaigning against library closures.

Moyes also manages the scheme Quick Reads, where bestselling authors write short versions of their books, making them accessible to everyone.

Both writers discussed the importance of knowledge and the power being able to read gives you.

There was also an exciting announcement, with Nicholls telling us that there is an upcoming four-part BBC drama adaptation of Us, staring Tom Hollander among other big names. Both Moyes and Nicholls write for the screen and they discussed the gulf between fiction and screenwriting.

Nicholls said that so much is lost when novels are transferred to the screen that as a writer you have to be prepared to give up your words. Moyes, nodding, agreed that when it comes to the process of making movies writers are the “lowest of the low”.

But not on Sunday. On Sunday, both writers were revered and the audience eagerly asked questions.

As the event drew to a close, both writers were asked if it is hard to say goodbye to their characters. “Finishing a book is a depressing experience,” said Nicholls, although he added that it is a “protracted goodbye” because the characters sometimes pop up elsewhere in TV or film and his book tour for One Day lasted two years.

Moyes agreed that she grieves at the end, but laughed that writing a book is like having a teenager in that “the editing process makes you pleased to see the back of them”.

For Sunday’s audience, it was a reluctant goodbye. The event was lively and uplifting and we can only look forward to more love stories from both in the future.