Comedian has walked the walk 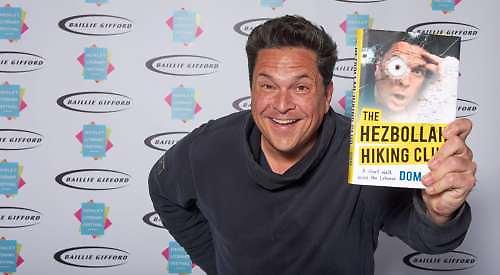 THE early noughties were defined by some of the greatest television comedy shows of all time, not the least of which was the sidesplittingly funny Trigger Happy TV, where unsuspecting street passers-by were subjected to all manner of utterly inappropriate on-camera taunting and embarrassment.

So it was perhaps sad to hear the creator of the show and one the great comedians of that era, Dom Joly, admit to the Henley Literary Festival on Friday evening at Phyllis Court that Britain had, in recent years, “lost its satire”.

A 200-strong gathering at 8.30pm in the the Finlay Suite heard Joly reflect on how comedians probably ultimately wanted to “be taken seriously” despite regular interjections of some of his hilarious facial expressions and deadpan asides to the audience while being interviewed by Mark Palmer of the Daily Mail.

A love of walking inspired him to return to his childhood stomping ground on his 50th birthday to attempt the 28-day trek on the Lebanon Mountain Trail with two of his closest friends, Chris and Harry, the events of which are chronicled in his new book The Hezbollah Hiking Club.

Joly grew up in Beirut and went to early school locally — coincidentally with the late Osama bin Laden, a few years his senior — but wound up being privately educated in Blighty from prep school age onwards.

He felt that the relationship with his father had deteriorated after his parents split up while he was at school in England, so the return to Lebanon for the hike seemed part of a homecoming ritual, and the book itself “a love letter” to the country.

Among Joly’s intriguing asides were revelations that not only has post-civil war Lebanon been quite safe to visit since as far back as 1990 — and that not enough people do so — but that it is a greener, lusher country than is commonly perceived.

He spoke with passion too about how hospitable and cosmopolitan is this nation of born-and-bred outward looking traders.

A return to comedy, though, and more Trigger Happy antics? Rather disconcertingly for this writer, no, but mostly because his teenage children would not countenance him dressing up as a squirrel any more.