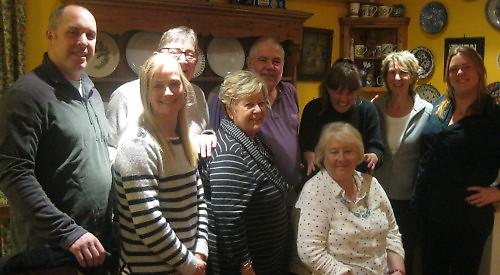 THE Watlington Phoenix Players have risen from the ashes, 15 years after the Watlington Players gave their last performance.

Their first production, Dylan Thomas’s popular radio play Under Milk Wood played to capacity audiences in the town hall on three consecutive nights — to the delight of all lucky enough to get a ticket.

Under Milk Wood is an ensemble piece, demanding on all the actors, and a perfect showcase for the varied talents of the newly formed group.

It had been a long-held ambition of the director, Carol Horton, to stage this play.

Timing-wise, it is 65 years since the posthumous BBC premiere of Thomas’s masterpiece with Richard Burton as First Voice, and the flavour of that production was reflected here in the staging, dress and use of sound effects, expertly provided by the backstage crew, Tim Horton and John Sennett.

Under Milk Wood was described by its author as primarily “a play for voices”. The multiple characters from the small town of Llareggub were brought to life with pitch-perfect accents, charm and an obvious rapport between the actors.

The reappearance of the drama group has been greeted with enthusiasm and demonstrates an appetite for drama in Watlington.

We await their next production with keen anticipation.