Gothic romance is getting an Eyre-ing at the Kenton 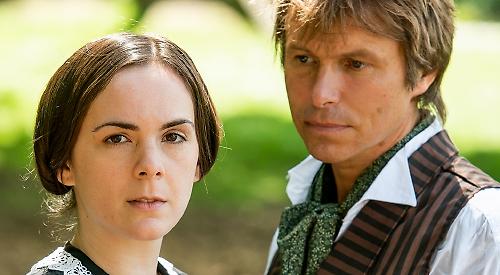 “I AM no bird and no net ensnares me — I am a free human being with an independent will.”

So declares Jane Eyre, the heroine of Charlotte Brontë’s most famous and enduring novel.

Today a staple of the GCSE English syllabus, the book was first published in 1847 as Jane Eyre: An Autobiography.

The author, who had seen her first novel The Professor rejected by publishers, initially used the male pseudonym Currer Bell.

But the huge success of Jane Eyre meant that Charlotte and her sisters Emily and Anne — who had written novels under matching pen names — were able to go public with their real identities the following year.

Jane Eyre revolutionised the English novel by being the first to focus on its protagonist’s moral and spiritual development through an intimate first-person narrative that saw actions and events coloured by a true-to-life psychological intensity.

As a result, Charlotte Brontë has been called “the first historian of the private consciousness” and the literary ancestor of writers such as Marcel Proust and James Joyce.

Now the book with which she made her name is coming to the Kenton Theatre in the form of a new stage adaptation by Bracknell’s Blackeyed Theatre company.

Writer Nick Lane started out as an actor but after a car accident damaged his back he turned to writing and directing.

As well as a number of original plays, his CV includes such literary classics as The Strange Case of Dr Jekyll and Mr Hyde, Frankenstein, The Wakefield Mysteries, Lady Chatterley’s Lover, the Sherlock Holmes mystery The Sign of Four and George Orwell’s 1984.

Looking ahead to Jane Eyre’s two-night stay at the Kenton Theatre next Friday and Saturday (January 24 and 25), Nick said: “Plays based on books have to be their own thing, no matter the manner in which their stories are related to an audience. I’m still pinching myself that I was given the chance to adapt such an incredible, iconic novel as Jane Eyre.”

The stage version of Brontë’s gothic masterpiece follows Jane from her orphaned childhood to her life at Thornfield Hall with the mysterious and brooding Mr Rochester. But her newfound happiness is threatened by hidden pasts in the gloomy, forbidding mansion — whose terrible secret forces her to make a heart-wrenching choice.

Knowing the novel as he did, how did Nick approach the challenge of adapting Jane Eyre?

“The facetious answer would be ‘very, very carefully’,” he laughs. “People think writing is a singular process but that’s not entirely true: it’s collaborative.

“The vision has to be the writer’s but beforehand — while you’re forming your ideas — it’s always good to talk things through, so I approached this adaptation by discussing the book with Adrian McDougall, the artistic director of Blackeyed Theatre. Not only is he a really good sounding board, he’s also very clear when wearing his producer hat on what the company’s needs are — you know, how many actors can I have to tell the story? Will they need to be physical peformers, actor-musicians? That kind of thing.

What were the key challenges he encountered along the way? “I’d have to say, number one was always going to be getting Jane right. She’s such an important character in literature — at that time in history, to create a female character able to shape her own destiny, to choose, to risk everything, to follow her own soul. She’s absolutely iconic.

“It’s a wonderful novel for other reasons too, but the eponymous heroine — I think she’s been an inspiration to a lot of women and continues to be.

“Being a bloke, I think I felt some pressure. Maybe it wasn’t there, maybe I was putting it on myself — I just didn’t want to let anyone down.

“I have a friend who reads the book every year. She’s a smart woman and I consulted with her a lot, so I’ve at least brought her Jane to the stage.

“And to be honest, a lot of the heavy lifting was done by Charlotte Brontë — once you distil the dialogue and craft it for the stage what she’s put on the page is a gift.”

That’s certainly the view of Kelsey Short, the actress playing Jane, who says: “I love the fact that she is a woman all people — young and old — are likely to know about or at least have heard of. It’s a timeless story and will always be relatable. I also love that it isn’t your stereotypical love story. For me the gothic element is such a pivotal factor in the story and helps make this a unique piece of theatre.”

With five months of touring ahead, what are the challenges for Kelsey of playing the same part over such a long period?

“Keeping everything fresh and organic,” she says. “Hard though it is over a long period of time, it’s so important to be in the moment, reacting and listening as if it’s the first and only performance. The beauty of theatre, of course, is that a difference in intonation can change the dynamic of a scene and of course the audience is different every night too. I guess the idea is to never get complacent and always be willing to keep playing.”

That being so, how would Kelsey describe Jane as a character? “She’s a strong, independent woman who is struggling with her insecurities and a need to be loved. For me, that’s the basis from which I can explore the character further.”