I like writing dark stories but they’re not about me 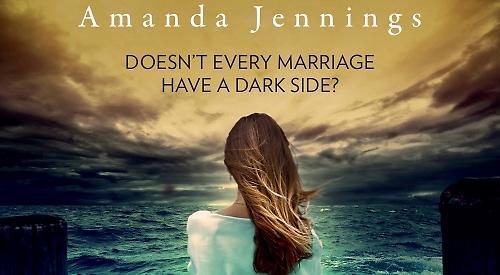 THE coronavirus outbreak and subsequent lockdown have made Amanda Jennings’ latest book more timely than ever.

The Storm focuses on a couple whose marriage is defined by coercion and psychological abuse, a problem which experts fear is on the rise as families have to spend more time together to help bring the pandemic under control.

And while her protagonists’ relationship never spills over into violence, Jennings admits the current situation could push their underlying tension to breaking point.

The former BBC researcher, who lives in Binfield Heath with her husband Chris and children Ella, 22, Beth, 18, and Lexi, 14, began writing her fifth novel a few months before its predecessor, The Cliff House, was published in 2018.

It is once again set in Cornwall, where her mother’s side of her family lives, and unfolds between a village near Penzance in the present day and the busy fishing community at Newlyn harbour during the Nineties.

The main characters, Nathan and Hannah, appear to have both the perfect marriage and the perfect home but behind closed doors Nathan controls his wife’s every action by choosing her clothes, checking her receipts and locking her passport away.

It slowly uncovers Hannah’s reasons for staying, which relate to a tragedy that took place during a storm decades ago, and shows the consequences of that night finally catching up with the couple.

Mrs Jennings came up with the idea during a visit to her mother, when one day she got up early and drove around the area until she came across the harbour.

She was fascinated by the bustle of the fishermen so researched the industry as the setting for her story.

At the time, she wasn’t aware of campaigns by police forces and women’s charities to raise the profile of controlling behaviour in relationships and tackle emotional as well as physical aggression.

She said: “I was keen not to have any violence or physical abuse in the relationship as it’s more about coercive control.

“Nathan doesn’t raise a finger to Hannah or make explicit threats but does things like checking receipts or keeping her passport and money, so she’s effectively living in a prison without walls.

“It explores what’s keeping her there despite the lack of an obvious danger. She’s also quite a strong character, so it’s not even as though he’s more bullish and brash than her — it’s more as though there’s some kind of unspoken agreement between them.

“In real life, we often hear about people stuck in unhealthy relationships and wonder ‘why doesn’t she or he just leave?’ and this brings that question to the forefront.

“I didn’t want to set it completely in the Nineties or in that fishing community but that’s the starting point for everything that follows.

“My books often feature a crime that’s been committed in the past and look at how those secrets and repercussions carry through to the present.”

Mrs Jennings wrote The Storm in about 18 months, finishing her final draft in October last year, and it will be published this summer.

She said: “It’s not always obvious what I should write about — sometimes it’s instinctive, starting with a single idea and growing from there.

“Each time I do a redraft, I’ll see various aspects that capture my interest and need more priority, or conversely I’ll see something that doesn’t advance the story and can be dropped.

“The question of what keeps Hannah married, which was the
initial inspiration, always remained central as the book was taking shape.

“About 10 years ago I had a friend who was caught in a relationship with no financial control and that stuck with me.

“It wasn’t traditionally ‘abusive’, and she probably wouldn’t have described it as such, but it was so different from my marriage, where we’ve always had a joint say over everything.

“It’s fascinating to explore characters like that and allow these situations to develop.

“I think sometimes writers pick up on small, subtle changes taking place and while I didn’t consciously notice increased publicity on the issue, I felt like it happened in parallel to my writing.

“I’d catch people talking about it on the radio and think, ‘oh, that’s what I’m writing about’.

“I’ve always been concerned about domestic violence against women and, as we’re becoming increasingly aware, against men. We’re realising it’s fairly endemic and perhaps before the #MeToo movement those behaviours were accepted as part and parcel of everyday life.”

Mrs Jennings, who was married in 1999, says her domestic life has always been happy but she doesn’t struggle to imagine being in a more troubled scenario.

She said: “Writers are a peculiar group of people with a lot of empathy so it goes with the territory that you automatically feel what others are feeling.

“I find it very tough to separate my emotions from any story I’m reading or listening to.

“I’m always observing so it’s easy to slip into these people’s heads and consider what they’re going through, then slip back out to make lunch for the kids.

“That’s a fairly unique character trait in my profession — that ability to walk a mile in someone else’s shoes, then kick those shoes off and be yourself again.

“I’ve always enjoyed writing darker stuff and exploring how people deal with drama. It’s perhaps a chance to right some of the wrongs you’ve witnessed personally — to make things better for people and show the possibility of a light at the end of the tunnel.

“I’ve been very moved by some of the stories I think about, especially if it’s dealing with things like children, but it’s like being an actor as you can play the part, then forget about it and go for a beer with your mates.

“However, I do think seriously about relationship issues as a parent and teach the girls to respect other people’s decisions as well as having the confidence to contradict unsavoury behaviour.

“I would always urge them to speak up if they feel something’s wrong and have instilled the need to be financially independent.

“It goes back a long way as my great grandfather was a suffragist in the 1890s and held the overriding belief that women should be educated, which was rather unique back then.”

Mrs Jennings, who is helping to run a mutual aid group for villagers who are self-isolating due to the virus, says people didn’t initially think about domestic violence during the lockdown but it soon became clear that the risk was increased.

She said: “Most people didn’t consider it until after the restrictions came in. It’s interesting to analyse from my characters’ point of view because if they were locked in the house together without his job or her weekly visits to her mum, it probably could have escalated into physical violence.

“I could easily imagine a man like that becoming aggressive for the first time, although it’s not something I’d considered much. It makes me think I should write a sequel. It’s sad to think that, in the real world, divorce lawyers are now busier than ever.

“I’ve been passing official information to residents which points out that you can still visit a friend to cool off after an argument and I think that’s very important.

“There are some families with no access to outside spaces and mounting money and childcare issues so I can see how tensions could be magnified.”

Mrs Jennings is now working on a sixth book and has so far written about 20,000 words.

The story will be set in the Noughties among a community of people who have broken off from society to live a self-sufficient
lifestyle.

She said: “It feels very precious to say it but I’m struggling to sit down and write with everything that’s going on at the moment.

“I’m conscious of the fact that many people have no choice but to carry on working but it’s harder to step mentally into a dramatic situation when you don’t have a relatively safe and normal life to return to.

“We’re facing an unprecedented degree of change and disruption but I’m making progress. Like most people, I’m having to make the effort to motivate myself, whether that’s to write or to do a bit of exercise.

“The character in my new book is also controlling but in a different way, like a cult leader. He believes he has all the answers to human fulfilment and is able to manipulate other people into joining him and following his dream.

“Happily, I’ve never experienced that behaviour in my life but I’ve always found controlling people fascinating because their outlook is so different from my own.

“I believe in personal freedom and accepting differences of opinion so it’s hard to fathom that you’d force your own standards for living on to other people.”