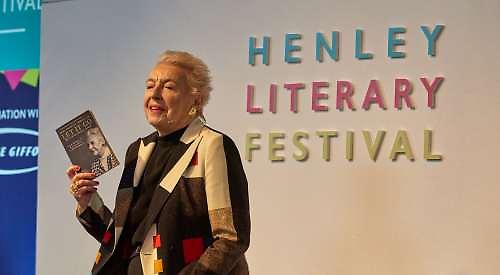 THIS year’s Henley Literary Festival will be “significantly” smaller and will be held mainly online, say the organisers.

Despite more easing of the coronavirus lockdown restrictions, event founder Sue Ryan said it did not give any assurances that they would be able hold the festival as planned.

She said venues, understandably, could not commit and there was no indication when the Government would allow big groups to gather indoors.

This had resulted in  the virus removing the festival’s anticipated income.

The 14th annual event will still be held from September 26 to October 4 but Mrs Ryan said the full programme of 200 events had been “torn up” and could be reduced to as little as 40 to 50.

She said: “It’s very worrying. Whatever happens, we will make a huge loss this year.”

She said the festival had always put money aside for a “rainy day” but she said: “This isn’t a rainy day, this is a storm.

“If we can get through this year and raise enough money to reduce that loss then, yes, I’m confident but it’s not going to be easy.

“We have a very loyal and supportive audience and I’m sure they will do what they can to keep us going.

“What we have to do is plan for a digital festival. The good news on that is we can have some stupendous names and geography no longer matters”

She said her daughter Harriet, the festival’s director, had been talking to publishers and some “fantastic names are being mentioned”.

Under the smaller format, events may be held outside the festival’s confirmed dates to tie in with b ook publication dates. If the situation did improve there might scope for holding some “live” events.

Mrs Ryan said it was important to stage an event that was safe for both authors and audiences.

The festival, which has made three of its four staff redundant, said that in order to survive and produce future festivals it would need to raise significant funds and needed the public’s support.

In an email to supporters, said: “We are proud of the contribution we have been able to make to the community over the last 14 years.

“As well as bringing award-winning novelists, sporting icons, poets, faith leaders, historians, entertainers, campaigners, children’s authors and, so far, three prime ministers to our town, we are delighted to have been joined by thousands of visitors and the national media.

“We have strived to keep ticket prices affordable — from £5 for our schools programme and £9 on average — and are delighted at the positive impact we have had to our local economy, supporting so many retailers and restaurants over the years.

“Please consider playing a crucial part in ensuring the future of our festival. For £35 you can become a Friend of the festival, for £100 a gold friend and for £250 a platinum friend. Friends are the first to hear any festival news and buy tickets, as well as enjoying discounts with our partners.”