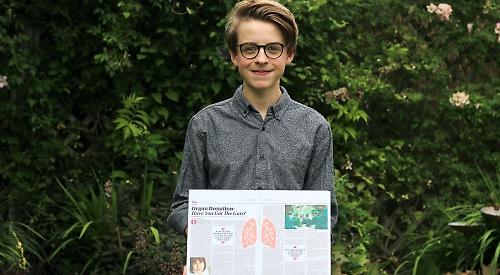 A TEENAGER from Shiplake has won a national journalism award for his feature on organ donations.

Sam Penrose, who lives in Orchard Close, has been writing for his student newspaper, The Martlet, at Abingdon School for the last four years and is now its deputy editor.

The Lent edition featured his interview with Dr Catherine Penrose, who is a consultant in paediatric intensive care medicine at Leeds General Infirmary and is also his aunt.

It was judged by Liz Hunt, assistant editor at the Daily Mail, who said: “I could see this on the health pages of a national newspaper.”

He also received the award for the best front page from the same edition, which focused on the impact of the coronavirus pandemic.

The law changed in May, meaning that organ donation in England is now handled on an “opt out” basis, meaning your organs will be donated when you die, unless you are part of an excluded group.

His article “Organ donation: have you got the guts” was inspired by his aunt.

Sam said: “She has always been talking about the importance of organ donation and it is a topic I hadn’t heard much about in mainstream news, but it is such an important subject.

“I was really excited to win. It was a surprise because this is one of the first pieces I wrote — I wasn’t expecting it at all.

“I work on the newspaper mostly in design and page layouts but I have slowly done more pieces of journalism and I have really enjoyed it.

“I had done bits of creative writing before but nothing like this. I also work on the school magazine, The Abingdonian, and I am now the deputy editor of the newspaper.

“I enjoy working together as a team and seeing all of the different elements come together. You realise how much effort goes into other newspapers because we just do it every term.”

The award winners were announced via video message on June 29 due to the restrictions of the coronavirus pandemic. Sam would have otherwise attended a prize-giving ceremony in London.

It is a national competition with about 20 categories, recognising secondary school children for excellence in areas such as writing, photography and marketing.

As a reward, Sam will be taking part in a journalism masterclass with Simon Heffer and Glenda Cooper of City University in January 2021.

Sam lives at home with his parents Chris and Wendy and his older sister Amy, 19, who is studying English Literature at Leeds University.

His father is a marketing consultant for Prosper 21, while his mother is a jeweller.

Dr Penrose, who is his father’s sister, was one of the founders of the “Be A Hero” campaign, which was established to encourage more people to join the organ donation register prior to the change in the law.

Sam added: “I first spoke to her about this when former Prime Minister Theresa May was talking about changing the law a long time ago.

“I was surprised to learn that you are much more likely to need an organ rather than give an organ. I did the interview with my aunt in February over Facetime and spread her thoughts throughout the article to help it flow a bit better.

“There are specialised cases where you have to die in specific circumstances and if you aren’t opted in, there are even fewer people that can give an organ and that is what makes it such an important subject.

“For the front cover, I just really liked the simplicity of it. We have been trying to make the covers simple to make them stand out because before they have been quite cluttered.”

In the UK, three people die every day due to a lack of suitable organ donors and a donor has the potential to give up to nine different organs.

Sam, who is in Year 12, plans to study Architecture at either Bath or Manchester University, but he hopes to keep up his passion for journalism.

He said: “It is quite a different direction to take, but I still want to do writing in my free time, I have always liked art and design. I am really interested in the whole design process.

“I would definitely like to do more journalism before leaving school. I really enjoy doing that and I want to streamline the paper and improve the number of interviews that we do to make a mark in my last year.”