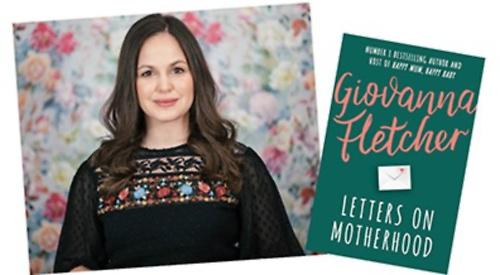 ON Friday night it was a pleasure to finally listen to Giovanna Fletcher in conversation with Steph Douglas.

Her long-awaited event was originally scheduled for March, then postponed to October and finally, on Friday, although not in person, it took place online.

Fletcher, author of Letters on Motherhood, chatted candidly about being a mum and her career, as Steph Douglas described it as “the struggle and the juggle” — even drawing parallels between lockdown and motherhood. The two women agreed that both cause emotional swings from complete chaos to absolutely fine.

The conversation was like a warm hug, not even a socially distanced one, but a big, much needed, reassuring embrace.

Motherhood is hard, admitted Fletcher and Douglas, both mums of three, and often it is about just “getting through”.

Yet there are those moments, perhaps more easily appreciated due to lockdown, when you realise, despite the tears and the tantrums, how lucky you are to have your children, your house, your job, and to be able to put food on the table and you think you should feel okay, but you don’t always.

Honesty was key. Fletcher said over and again that despite all of the above, it is okay to still feel sad sometimes. As Douglas described it, life with young children is the “rush hour of life” and it is exhausting.

As a mum of two myself, with one of my girls under a year, it felt like such a relief to hear it spoken out loud. You are not failing just because you have a bad day, or week, or feel you need time to yourself. Fletcher laughed saying time to herself was “luxurious”.

Despite the warmth of the conversation, there was a serious message about maternal mental health, as Fletcher reminded us that suicide is the leading cause of death in new mums. A shocking and tragic fact.

She said she believes “honesty is the best thing you can give to another mum”. There is no point saying it is all wonderful, because it isn’t always.

As mums we put pressure on ourselves to be perfect, to always be better, and yet we feel like we are failing at something which should be natural. We constantly feel judged.

Douglas nodded in agreement as Fletcher added that “our biggest judge is ourselves”, whether because we are judging our bodies, the type of birth we had, the way we feed our babies, if we co-sleep or not, if we work, send our children to nursery — the list could go on and on. There are so many ways we are made to feel we are not good enough. The subject matter was emotional and it could have been a miserable topic for a Friday evening — we all know how hard motherhood is — but Fletcher and Douglas laughed through the toughness of reality: they reassured, offered comfort and provided hope.

As mums, it is good to know that we are not alone and on Friday it felt like we were among friends, socially distanced as we were.

It was inspiring, too. Fletcher, as well as being a mum of three, is a writer, actress, TV presenter and blogger. She talked about her working day — from getting up in the early hours with her children to working until midnight or later once they are in bed.

With motherhood, sometimes you lose yourself for a while, the demands of a baby or young child are all-consuming, but with time you find yourself again and in Fletcher’s case she certainly has and with great success.

Asked what her favourite letter from the book is, she said it was the one about acknowledging that one day we will no longer be the centre of our children’s world, that they will fall in love, they will have their hearts broken. And that one day, we will forget the challenging moments of today and “look at how far we have come as a family”.

What more can we ask for, especially in these strange times?

As the conversation came to a close, the potentially long night ahead with a baby didn’t feel so daunting, for Fletcher reminded us there is camaraderie in motherhood and we are not alone, even when connecting through a computer screen.