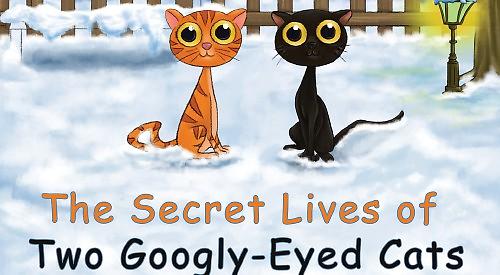 A MOTHER has written a children’s book based on stories she used to tell her daughter to help her get to sleep.

At one week old, her daughter Penny developed a potentially dangerous condition on her face and airways called segmental haemangioma. This is an overgrowth of blood vessels that form a red mark and swelling.

After two weeks of doctor’s appointments she was eventually diagnosed and referred to Great Ormond Street Hospital.

For the first two years of Penny’s life she had to have medication, which disrupted her sleep patterns.

Henrietta, who lives in Medmenham, used to make up stories about Penny’s two soft toy cats to try to soothe her.

She said: “Penny was put on some strong medication until she was two, which disrupted her sleep and meant that I didn’t get much sleep either.

“I would be up at 2am for a couple of hours and she has these googly-eyed cats and I used to tell her stories about them.

“I would talk about how, once she falls asleep, the cats would come alive and go out to have all sorts of adventures.

“I told her that when she falls asleep they go outside and hang out and get up to all sorts of mischief.”

Henrietta, who works in marketing and PR, decided to write down her ideas and came up with a rhyming story.

This follows Milly and Tilly, the googly-eyed cats, who belong to a cheeky little baby called Penny.

During the day, they sit on her mat playing games and acting like normal toys.

But at night, when Penny is asleep, they creep out the back door in search of fun and adventure. Together they ransack bins, scrap with other cats and generally cause mischief.

Then, at the end of the night, they sneak back inside and wipe their paws clean so Penny doesn’t know that they’ve been out all night.

However, one day in winter, heavy snows falls. The cats decide to be brave and sneak out. But the snow is too deep for their little legs and they get stuck.

They are rescued by a friendly dog, who was inspired by Henrietta’s neighbour’s Bernese mountain dog.

In January 2019 she sent her manuscript to several publishers, who all expressed an interest in taking the story, and she signed up with Austin Macauley Publishers. Henrietta said: “I spent much of my maternity leave just playing around with the idea and once I got a story together I sent it off to a handful of publishers.

“Austin Macauley came back first and said they really liked it and then a couple more came back later and they also said they liked it.

“I had to fill out an author’s form and tell them about the values I was trying to project in the story, such as kindness and preparing children to be courageous and creative, and I had to think about what I wanted the front cover to look like and how I wanted the characters to look. I then started work with an illustrator to put together the concept as it is a picture book with big page images.

“It was a journey — I didn’t really know what the finished project would look like. I work with designers in my day job but I have never worked with someone like this.

“The images are really fun — children love the big eyes. I am very excited to see the book and to read it to my daughter and I hope when she is older she will be really proud.”

Henrietta, who is now aged three and attends the Old Station Nursery in Henley, remains an outpatient at Great Ormond Street.

Her skin remains very sensitive and she will continue to receive support for the next four years or so.

Henrietta has decided to give half the proceeds of the book to the hospital in gratitude for her daughter’s treatment, while the other half covers her costs.

She described the process of producing the book as “really fun” and has continued to write stories, including a sequel.

• The Secret Lives of Two Googly-Eyed Cats, which is for children aged three to five, is published today (Friday). It is available in hardback, paperback and on Kindle from Amazon and direct from Henrietta’s website, www.
henriettamackenzie.ampbk.com